UN Photo/Evan Schneider
UN High Representative for the Alliance of Civilizations, Nassir Abdulaziz Al-Nasser (top left and on screen), addresses the opening of the Sixth Global Forum of the Alliance in Bali, Indonesia.
29 August 2014

United Nations officials today highlighted the important role played by the initiative known as the Alliance of Civilizations in building bridges to peace, especially amid the current instability in many parts of the world, as they kicked off a global forum in Bali, Indonesia.

“The Alliance is here for you to serve as a soft power tool for conflict prevention, reconciliation, and to advance sustainable development,” said the High Representative of the Alliance of Civilizations, Nassir Abdulaziz Al-Nasser.

Launched in 2005 through the initiative of Spain and Turkey, under the auspices of the UN, the Alliance seeks to promote better cross-cultural relations worldwide.

Addressing the opening of the 6th Global Forum of the Alliance of Civilizations, Mr. Al-Nasser said the crises in Iraq, Gaza, Syria, the Central African Republic, Nigeria, Myanmar, and Sri Lanka clearly demonstrate that societies are grappling with identity-based tensions.

“Globally, there is a persistent need for the work of the Alliance if we really want to pursue the future we want,” he told the gathering of government officials, business representatives, faith leaders, media professionals and young people from around the world.

Mr. Nasser noted that the Alliance retains a strong commitment to innovative approaches. For example, it is working with the UN Development Programme (UNDP) to promote digital games and apps as avenues for cross-cultural dialogue and conflict resolution.

It is also working with private sector organizations such as the BMW Group and others to promote dialogue and intercultural understanding, while making vital contributions to prosperity and peace.

Secretary-General Ban Ki-moon noted in his remarks that too many of the world’s worst crises are driven by those who exploit fear for power. “Too many societies are fracturing along cultural, religious or ethnic lines,” he stated, adding “We have much work ahead of us across a landscape of tension.”

In this context, the many grassroots initiatives supported by the Alliance are making a real difference around the world, from encouraging Muslim-Christian volunteerism in Mindanao to helping Pakistani university students take the lead in healing sectarian divisions.

This is the first time the Forum is being hosted in the Asia-Pacific region. With the theme of “Unity in Diversity: Celebrating Diversity for Common and Shared Values,” the gathering will focus on the ongoing discussions on the post-2015 development agenda. The theme also includes a direct reference to the Host Country’s national motto, “Unity in Diversity.”

Speaking at a joint press conference with Indonesian President Susilo Bambang Yudhoyono, Mr. Ban said the Forum was taking place at a time when extremism poses a grave threat. “Promoting tolerance as well as inter-religious and cross-cultural dialogue has never been more important,” he stressed.

He also lauded Indonesia for setting an “excellent example of a vibrant democratic culture,” and congratulated its people on the successful holding of peaceful and democratic elections this year. He paid tribute to Mr. Yudhoyono’s legacy as the first democratically-elected president and for steering the country towards greater political transparency and economic growth, adding that he looked forward to working with President-elect Joko Widodo.

Also addressing the Forum today, General Assembly President John Ashe said: “With increasing movement of people across our planet, the diminution of physical borders which modern technology allows, and the intermixing of cultures, human civilization is becoming less monolithic and more diverse.

“These differences enrich us but they also challenge us to find new levels of empathy, understanding and respect for our inherent differences.”

He said the Alliance not only focuses on building peace and transforming the roots of conflict, but it also highlights and promotes what is best in the human spirit, as well as the positive ways in which people communicate and share.

Many of the issues the Forum will touch on during the course of the two-day meeting serve to highlight the core work of the Alliance, he added, citing the power of sports, art, music, entertainment, social media and cross-cultural dialogue.

“Cultural exchange allows us to welcome and appreciate those who are different and to build on those differences to create more inclusive, open and peaceful societies. It is a powerful vehicle to strengthen social cohesion, and can play a role in conflict prevention and reconciliation.”

As one of the meeting’s outcomes, members of the Alliance’s Group of Friends will adopt the Bali Declaration on the Alliance of Civilizations, reaffirming their commitment to support the mandate of the Alliance and identify concrete and implementable measures in line with the main theme of the Forum. 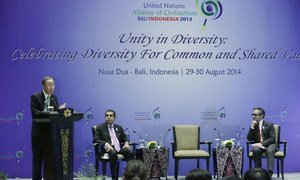 Addressing a youth forum in Bali, Indonesia, Secretary-General Ban Ki-moon stressed the role of young people in building a peaceful, sustainable future and encouraged them to be solid global citizens and leaders of today.