UNFPA Ukraine/Olena Kulyk
Hundreds of thousands of people have been displaced by the ongoing conflict in eastern Ukraine, many being women with children.
28 August 2014

Secretary-General Ban Ki-moon said he is alarmed by what seems to be a “dangerous escalation” in the crisis in Ukraine with reports of intensified fighting in the country south-east near the border with Russia, as the Security Council held emergency talks on the latest developments.

“The international community cannot allow the situation to escalate further nor can a continuation be allowed of the violence and destruction that the conflict has wrought in eastern Ukraine,” Mr. Ban’s spokesperson said in a statement.

It is reported that the fighting in eastern Ukraine has spread southward, near the border of the Sea of Azov and Russia.

“If confirmed, this will mark a dangerous escalation in the Ukrainian crisis,” said the statement.

Briefing the Security Council on the latest developments, Under-Secretary-General for Political Affairs Jeffrey Feltman said that illegal armed groups operating in the Donetsk region have reportedly intensified their activities over the last two days, spreading violence along Ukraine’s southern coast, in the direction of the key strategic port of Mariupol.

It has further been reported that several small towns and villages in the area are now in the midst of heavy fighting, while the town of Novoazovsk has been seized by the armed groups. The battle for Lugansk continues, and hostilities in Donetsk in several key strategic areas have been spreading, he added.

“We cannot ignore the deeply alarming reports of Russian military involvement in this new wave of escalation,” he stated. “If confirmed, it would constitute a direct contravention of international law and of the UN Charter.”

He added that the UN has no independent means of verifying this information, and Russia has staunchly rejected these reports.

Mr. Feltman, who was in Kyiv last week to consult with Ukrainian officials, said the situation on and around the border between Ukraine and Russia remains a key obstacle to the de-escalation of the situation on the ground as arms and heavy weaponry reportedly continue to flow unabated into Ukraine from Russia. “There is an urgent need to ensure a secure border between the two countries, with international verification,” he stated.

He noted the recent statement made by Ukrainian President Petro Poroshenko that the first bilateral consultations between the border guards of Ukraine and Russia are scheduled for 30 August.

It is also critical, Mr. Feltman added, that the elections scheduled for 26 October can take place throughout Ukraine and become a unifying and reconciliatory mechanism that will ensure that people throughout the country feel represented in Kyiv.

“The immediate focus must be to find ways to reverse the dangerous escalation of fighting over the past 48 hours and move quickly away from armed conflict and toward political solutions and dialogue,” he stated. 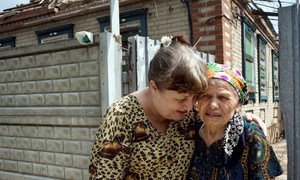 Reacting to reports that a Russian aid convoy crossed the Ukrainian border without Kiev’s permission, United Nations Secretary-General Ban Ki-moon today urged all sides to continue to work together to ensure that humanitarian supplies reach those most in need.