"Evidence shows that while they are likely to be less toxic than conventional cigarettes, e-cigarettes use poses threats to adolescents and fetuses of pregnant mothers using these devices,” said Douglas Bettcher, WHO Director of Prevention of Non-communicable Diseases in an interview with UN Radio.

Electronic nicotine delivery systems (ENDS), of which electronic cigarettes are the most common prototype, are devices that do not burn or use tobacco leaves but instead vaporise a solution the user then inhales. The report says existing evidence shows that e-cigarette aerosol is not merely "water vapour" as is often claimed in the marketing of these products.

The report outlines several regulations including a ban on nicotine-vapour products with fruit, candy-like and alcohol-drink flavours until it can be proved they are not attractive to children and adolescents. E-cigarettes have been marketed in almost 8,000 different flavours, and there is concern they will serve as a gateway to nicotine addiction and, ultimately, smoking, particularly for young people. Experimentation with e-cigarettes is increasing rapidly among adolescents, with e-cigarette use in this group doubling from 2008 to 2012, the report also states.

“E-cigarettes also increase the exposure of non-smokers and bystanders to nicotine and a number of other toxicants, the report indicates, and existing evidence also shows that e-cigarettes aerosol is not merely, as is often quoted, water vapour," Mr. Bettcher told UN Radio.

It is important to prohibit unproven health claims about e-cigarettes and protect existing tobacco control efforts from commercial and other vested interests of the tobacco industry, the report says. An appropriate Government body must restrict e-cigarette advertising, promotion and sponsorship, to ensure that it does not target youth and non-smokers.

The document also found there was currently insufficient evidence to conclude that e-cigarettes help users quit smoking or not. Therefore, WHO currently recommends that smokers should first be encouraged to quit smoking and nicotine addiction by using a combination of already-approved treatments.

Since 2005, the e-cigarette industry has grown from one manufacturer in China to an estimated $3 billion global business with 466 brands, a market in which the tobacco industry is taking a greater stake. WHO expresses concern about the tobacco industry’s role in this market.

Electronic cigarettes will be discussed at the 6th Conference of the Parties (COP) to the WHO Framework Convention on Tobacco Control, being held 13-18 October 2014, in Moscow. 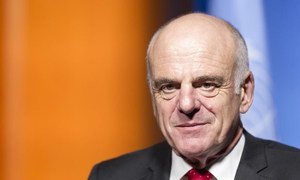 As the World Health Organization (WHO) ramps up its response to the unprecedented outbreak of the Ebola virus disease in West Africa, the wider United Nations, led by Secretary-General Ban Ki-moon, has launched a system-wide coordination initiative to assist Guinea, Liberia, Nigeria, and Sierra Leone in their efforts to halt the spread of the virus.