The United Nations has welcomed today’s announcement by the country’s electoral authorities of the first official decisions on the findings from the 100 per cent audit of the June 14 Presidential run-off election.

"The first set of official decisions from this unprecedented audit is an important milestone towards the goal of separating fraud from valid votes,” said Special Representative and head of the UN Assistance Mission in Afghanistan, Ján Kubiš, in a statement issued earlier today.

“However, it is still premature to draw conclusions about the final audit result based on these initial findings. All parties should continue to respect the process so as to not create unrealistic expectation,” he added.

The UN noted that of the 3,644 ballot boxes that were the subject of this first set of decisions, approximately 79 per cent of boxes were validated and 21 per cent were found to contain some form of irregularity, such as broken seals, results forms that did not reconcile and similarly marked ballots.

Today’s findings originate from information taken from each audited ballot box that is recorded and then entered into the database in the presence of observers and party agents. None of the 6,000 ballot boxes identified by the presidential candidates as requiring so-called “special scrutiny” were part of today’s first adjudication decisions.

"All parties will be better able to make assessments on the results in days ahead as the IEC [Independent Election Commission] releases its further decisions, including the results of the recounts ordered today and the 6,000 ballot boxes identified for special scrutiny by the candidates themselves," said Mr. Kubiš.

More than 70 percent of 22,828 ballot boxes have now been audited under the UN-supervised process. Of the over 15,000 boxes processed to date, over 30 per cent have also been provisionally recounted due to a finding of some irregularity in the physical audit. It is therefore expected that future sets of decisions by the IEC will include higher proportions of recounts as compared to today's first batch.

The IEC intends to release regular batches of findings as they become available in coming days in parallel to the conclusion of the physical audit of the remaining approximately 7,000 ballot boxes.

According to the Mission, in view of the unique and important role played by the presidential campaigns of Abdullah Abdullah and Ashraf Ghani, including their full access to the audit and genuine joint oversight over how it is designed and conducted, the UN continues to urge them to take every step to assist with the acceleration of the audit in order for it to be concluded at the earliest time.

UNAMA’s assessment echoes that of UN Deputy Secretary-General Jan Eliasson, who in an Op-ed for the Huffington Post today underscored that while the audit is nearing the finish line, its completion will depend on more than technical measures.

“Ultimately, the process rests on the willingness of the candidates to respect the results,” said Mr. Eliasson, adding: “The future of Afghanistan's political transition – as well as international support for the Afghan army and police – hangs in the balance. Economic stability in the war-ravaged and aid-dependent country is at risk. So, too, is the Afghan people's trust in democratic institutions and their political leaders.”

He said that Afghanistan's leaders have a responsibility to honour the faith that voters have placed in democracy and to avoid the divisive ethnic strife that has marked so much of its history.

“Now is the time to count the ballots, make good on commitments, respect the results, and turn the page to a new era of opportunity and hope that the Afghan people so need and deserve,” Mr. Eliasson said. 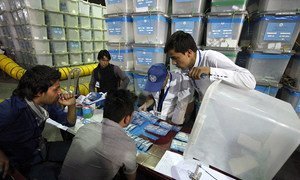 With two-thirds of the ballot boxes from the audit of the Presidential run-off election now processed, the United Nations in Afghanistan today urged the two campaigns of Abdullah Abdullah and Ashraf Ghani to cooperate fully with electoral authorities to bring the audit to completion at the earliest time.