UNICEF Guinea
UNICEF and partners visit a crowded market in Conakry, Guinea, to explain to vendors how they can protect themselves and their families from Ebola.
25 August 2014

The United Nations today cautioned against flight restrictions into and out of Ebola-affected countries in West Africa, saying such limitations were preventing the transport of critically-needed health workers and supplies, as well as contributing to economic and diplomatic isolation of the region.

“The current limitations on flights into and out of these countries, and the restrictions placed on aircraft originating from these countries transiting through airports in neighbouring countries, though understandable, are not warranted,” said chief UN Spokesperson Stephane Dujarric at the daily briefing at UN headquarters.

“It is not an optimal measure for controlling the import of Ebola virus disease,” he said. “The measure does not reflect what is known about the way in which the virus passes between people.”

The most recently available official figures by the World Health Organization dated August 20 show a total of 2,615 cases and 1,427 deaths reported in Guinea, Liberia, Sierra Leone and Nigeria.

Meanwhile, authorities in the Democratic Republic of the Congo (DRC) reported that 13 people have killed in an Ebola outbreak since July in a remote village in the area of Boende, Equateur Province, but said the strain of the virus was different from the one that's been ravaging West Africa. Ebola was first discovered in the DRC in 1976.

The Congolese authorities, the UN World Health Organisation (WHO) and non-governmental organizations are mobilizing against the disease. The UN Mission in the DRC, known by the acronym MONUSCO, has created an Ebola taskforce and is tracking and screening all its staff travelling to and from the affected countries in West Africa.

The UN System Coordinator for Ebola, Dr. David Nabarro and his team visited the affected-region to support communities tackle the outbreak, are in Guinea today, after visiting Liberia and Sierra Leone.

WHO said today that an unprecedented high proportion of doctors, nurses, and other health care workers have been infected in the current Ebola outbreak, prompting the African Union to try to urgently recruit more health care workers from among its members.

More than 240 health care workers have developed the disease in Guinea, Liberia, Nigeria, and Sierra Leone, and more than 120 have died, WHO said in its latest update.

Ebola has taken the lives of prominent doctors in Sierra Leone and Liberia, depriving these countries not only of experienced and dedicated medical care but also of inspiring national heroes.

Several factors help explain the high proportion of infected medical staff. These factors include shortages of personal protective equipment or its improper use, far too few medical staff for such a large outbreak, and the compassion that causes medical staff to work in isolation wards far beyond the number of hours recommended as safe.

WHO estimates that, in the three hardest-hit countries, only one to two doctors are available to treat 100,000 people, and these doctors are heavily concentrated in urban areas.

At the noon briefing today, Dujarric said the trend of limitations on flights is having three major adverse effects on efforts to control the disease.”

“Current flight limitations are hampering the movement of international experts involved in the control efforts. These flight restrictions hinder the capacities of aid organizations like Médecins sans Frontières (MSF) to deploy their personnel in support of the crisis response and mitigation,” he said.

“The ability of programmes involved in controlling the outbreak to transport essential equipment and materials to the region is also being severely hampered,” he said, adding that these limitations also contribute to the economic and diplomatic isolation of the affected countries and further compound the stigmatization already experienced by their citizens.

He reminded the public, as has the WHO since the beginning of the outbreak that: “Ebola is not spread through air borne contact. In addition, transmission is unlikely to occur through water or food; a person infected with Ebola virus is not contagious until symptoms appear; Ebola is spread through direct contact with the blood or body fluids of a person who is sick with the virus.” 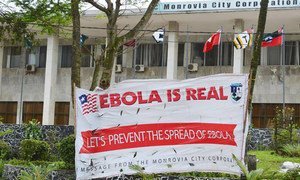 As part of the overall United Nations push to assist West Africa in battling the worst outbreak of Ebola in history, a cargo plane carrying 68 metric tonnes of supplies from the UN Children's Fund (UNICEF) landed today in the Liberian capital, Monrovia, bringing urgently needed items to shore up the country's weakened healthcare system.