UNMIL
A sign outside the Monrovia City Corporation in Liberia aims at preventing the spread of Ebola.
23 August 2014

As part of the overall United Nations push to assist West Africa in battling the worst outbreak of Ebola in history, a cargo plane carrying 68 metric tonnes of supplies from the UN Children's Fund (UNICEF) landed today in the Liberian capital, Monrovia, bringing urgently needed items to shore up the country's weakened healthcare system.

In a press release UNICEF says that today's shipment, from the agency's global supply hub in Copenhagen, contained basic emergency items for front-line health workers to protect themselves and prevent the spread of infection.

The items included 27 metric tonnes of concentrated chlorine for disinfection and water purification and 450,000 pairs of latex gloves. Also on board were supplies of intravenous fluids, oral rehydration salts and ready-to-use therapeutic food to feed patients undergoing treatment.

Liberia is one of four West African countries, along with Guinea, Sierra Leone and Nigeria, currently battling the Ebola virus disease outbreak, which the UN World Health Organization (WHO) says has claimed more than 1,300 lives. The official number of cases in the countries has surpassed 2,400, and overall, some 1 million people have been impacted.

Just yesterday, Dr. David Nabarro, Senior United Nations System Coordinator for Ebola, was in Monrovia on the first leg of a visit to the region. He told reporters that more health workers would be brought to the country to deal with the outbreak, saying “The United Nations is looking at ways to radically scale up support to fight Ebola.”

The supply flight today was met by representatives of UNICEF and Liberia's Ministry of Health and Social Welfare. Supplies will be distributed to health facilities nationwide, many of which are critically short of basic health care materials. Coupled with a shortage of manpower, this has left thousands of Liberians without access to treatment and essential health care.

As of Friday, 20 August, there have been over 1,000 confirmed or suspected cases of Ebola in Liberia, with 613 deaths linked to the outbreak. In part, the rapid spread of the disease is due to the country's weakened health care system, which had been seriously damaged by years of civil war.

“Basic health care cannot be Ebola's next casualty,” said Sheldon Yett, UNICEF's Liberia Country Representative, who noted that the agency has been working on multiple fronts since the beginning of the outbreak to provide critically needed supplies as well arming communities with the information they need to stop the spread of the disease.

“This shipment will complement those efforts with a new surge of supplies to equip health facilities, support infection control, and protect health workers on the front lines,” he added.

Next week, UNICEF will airlift additional health supplies on behalf of the Government of Liberia made possible through funding from the World Bank. UNICEF will also be helping the Government assess the country's supply chain capacity, which has been weakened by the crisis.

UNICEF is also deploying teams of traditional communicators to spread prevention messaging in communities across Liberia, and producing print communications and radio programming to raise public awareness of the outbreak. 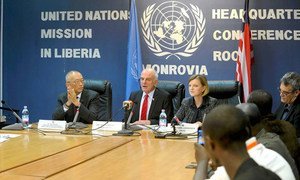 Dr. David Nabarro, Senior United Nations System Coordinator for Ebola who was appointed by the Secretary-General to establish how best the UN can support affected communities, was wrapping up the first leg of a visit to all Ebola-effected countries in West Africa.