The number of people killed in Syria is double the number documented a year ago, the United Nations human rights chief today announced, criticizing the international community for its failure to stop the “killers, destroyers and torturers” that have torn the country apart.

In a third report on Syria carried out on behalf of the UN Human Rights Office (OHCHR), data specialists identified 191,369 people killed between March 2011 and the end of April 2014.

“Tragically, it is probably an underestimate of the real total number of people killed during the first three years of this murderous conflict,” UN High Commissioner for Human Rights Navi Pillay said in a statement.

The figure was obtained by cross-checking a combined list of 318,910 reported killings, fully identified by the name of the victim, as well as the date and location of the death. According to Ms. Pillay’s office, any reported killing that did not include at least these three elements was excluded.

The list was compiled using datasets from five different sources, three of which have reported killings throughout the whole three-year period, and two of which – including the Government of Syria – cover only part of the period.

Records of reported killings were compared in order to identify duplicates, resulting in the final figure of 191,369 unique records of conflict-related deaths as of 30 April 2014.

Nearly 52,000 other reporter killings did not contain sufficient information to be counted, according to the study. The authors added that there is a “strong likelihood” that a significant number of killings may not have been reported at all.

The majority of the victims documented were men, with around 9.3 per cent women. In addition, the list includes 8,803 minors, including 2,165 children under the age of ten.

Ms. Pillay warned that with numerous other armed conflicts, the crisis in Syria “has dropped off the international radar.”

She said it was “scandalous” that the predicament of so many people is no longer attracting attention, and allowed to continue with no end in sight, affecting neighbouring Iraq and Lebanon.

“The killers, destroyers and torturers in Syria have been empowered and emboldened by the international paralysis,” the High Commissioner said.

In a similar message she delivered to the Security Council yesterday, Ms. Pillay castigated the 15-Member body for failing to take action to stop the violence, such as by referring the case of Syria to the International Criminal Court (ICC).

She also called on Governments take serious measures to halt the fighting and deter the crimes, and above all “stop fuelling this monumental, and wholly avoidable, human catastrophe” by providing weapons and other military supplies. 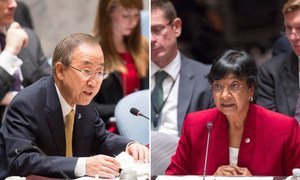 The Security Council today expressed its commitment to consider and use the tools of the United Nations system to ensure that warning signals about potential conflicts trigger “early, concrete preventive action,” as senior UN officials urged the body to take up the challenge of helping move the Organization from a culture of reaction towards one of prevention.