UNICEF
UNICEF has supplied its partners in Guinea with materials for disinfecting hospitals including sprayers and cleansers to prevent further spread of Ebola.
21 August 2014

The newly-appointed United Nations System Coordinator for Ebola today began his visit to countries affected by the deadly disease, as the head of the UN World Health Organization (WHO) appealed for “massive, coordinated and targeted assistance” in the months ahead, saying “a humane world cannot let the people of West Africa suffer on such an extraordinary scale.”

WHO also reported today that clinicians working in Liberia have informed the agency that two doctors and one nurse have now received the experimental Ebola therapy, ZMapp. The nurse and one of the doctors have shown a marked improvement, while the condition of the second doctor is still serious but has improved somewhat.

ZMapp is one of several experimental treatments and vaccines for Ebola that are currently undergoing investigation. At present, supplies of all are extremely limited.

WHO also said that it will host in Geneva on 4 to 5 September a consultation on potential Ebola treatment by gathering expertise about the most promising experimental therapies and their role in containing the Ebola outbreak in West Africa, where the official number of cases in Guinea, Liberia, Nigeria and Sierra Leone have reached 2,473, and the number of deaths 1,350.

The expertise among the more than 100 participants, including 20 experts from affected West African countries, will discuss issues of safety and efficacy as well as innovative models for expediting clinical trials, according to WHO. Possible ways to ramp up production of the most promising products will also be explored.

Meanwhile, According to a UN spokesperson in New York, the UN System Coordinator for Ebola Virus Disease, Dr. David Nabarro arrived today in Monrovia, the capital of Liberia, on the first leg of his visit to the region to establish how best the United Nations can do to support affected communities.

Karin Landgren, the head of the UN Mission in Liberia (UNMIL), said this visit underscored the UN’s commitment to rolling back the deadly virus. She said the Mission has reoriented several parts of its operations to support the Government in the fight against Ebola. UNMIL Radio and the Mission’s outreach team are also disseminating information on Ebola prevention and response, with UNICEF and the WHO.

“If we are to preserve the gains made over these 11 years of peace in Liberia, Ebola must quickly be stopped,” Ms Landgren said.

WHO Director-General, Dr. Margaret Chan, in an article from The New England Journal of Medicine titled “Ebola Virus Disease in West Africa — No Early End to the Outbreak” outlined the many challenges to be overcome in the worst outbreak in the nearly four-decade history of this disease, saying “with the formidable combination of poverty, dysfunctional health systems, and fear at work, no one is talking about an early end to the outbreak.”

“The international community will need to gear up for many more months of massive, coordinated, and targeted assistance,” she wrote. “ A humane world cannot let the people of West Africa suffer on such an extraordinary scale.”

Meanwhile, WHO flagged the importance of raising awareness about the virus in communities in the affected countries, by shining a spotlight on the lyrics of the so-called Ebola Rap written by a Liberian artist “to kick Ebola out of Liberia.”

“Take away the fear, don’t hide yourself. People can still survive from Ebola,” go the lyrics.

“Education and communication are crucial to make sure that everyone – health workers and the general public – understands what Ebola is, how it is transmitted and how they can protect themselves,” WHO said. “Through strong community involvement, various initiatives are starting to emerge, such as this song that Charles wrote.” 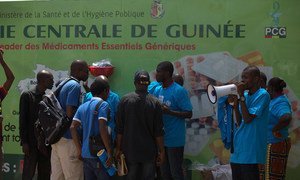 While the trends of the outbreak of Ebola in Nigeria and Guinea, where the virus made its first appearance in West Africa last December, have shown encouraging signs, the United Nations health agency today expressed concern about the situation in the Liberian capital of Monrovia.