OCHA
Taufua Beach, Samoa, is recovering from a tsunami which struck the area in 2009. The country hosts the Third UN Conference on Small Island Developing States, which will take place from 1 to 4 September 2014 in the capital Apia.
21 August 2014

Speaking to reporters in New York before he leaves for the Samoan capital, Apia, the Conference's Secretary-General, Wu Hongbo, said that with much of the political work already agreed on, participants can focus on how to take these decisions forward and on generating sustainable partnerships.

“This is the first international conference many of us can remember that has reached agreement on its political outcome during the preparatory process, before reaching the Conference itself,” Mr. Wu said in reference to the Third UN Conference on Small Island Developing States, which will take place from 1 to 4 September.

“This shows that there is broad agreement among UN Member States on the challenges that SIDS face, and on what needs to be done to address these challenges,” he added, using the acronym for the small island developing States (SIDS).

The outcome document, called the SIDS Accelerated Modalities of Action Pathway, or SAMOA Pathway, is now publicly available. In 124 points, it includes actions for categories ranging from 'sustained and sustainable, inclusive and equitable economic growth with decent work for all' to 'climate change' and 'health and non-communicable diseases.'

“They try to demonstrate that the challenges that the SIDS have are challenges for the whole international community,” Mr. Wu told the UN News Centre. He added that these small island developing States also have unique problems – for instance, their size and very limited resource base, remoteness and vulnerability to natural disasters – which are felt more acutely than by other countries.

“So as far as the outcome document outcome is concerned, they are trying to produce concrete and focused actions to deal with all these problems,” noted Mr. Wu.

In addition to the plenary sessions, the four-day Conference will have for the first time, so-called multi-stakeholder partnership dialogues as part of the official programme.

“This reflects not only the importance which the host country gives to partnerships, but also the realization that sustainable development can't be achieved by governments alone,” Mr. Wu said, underscoring the importance of civil society and private partnerships.

One example of a successful partnership is the Caribbean Challenge Initiative, said Mr. Wu, which mobilizes Governments, civil society and enterprises to protect and sustainably manage 20 per cent of the region's marine and coastal ecosystems by 2020.

Many of the 300 expected partnerships will be led by the 21 UN agencies whose heads are expected to attend the Conference. In addition more than 120 side and parallel events will be held in the city, which are likely to spur more collaborations.

All new partnerships are to be SIDS-specific, measureable and monitorable, achievable and accountable, resource based and results focused, with timelines for implementation and transparency by all parties, the senior official detailed.

As part of the outcome document, Secretary-General Ban Ki-moon is being asked to report to the UN General Assembly and to the Economic and Social Council on the progress achieved in its implementation.

In addition, the UN Department of Economic and Social Affairs (DESA) which Mr. Wu heads, is to continue to maintain a partnerships platform focused on the small island developing States and to oversee the overall implementation. 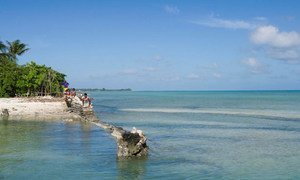 Can the United Nations help to protect people seeking safety abroad if their homes and jobs are destroyed by prolonged drought, rising sea levels or other climate change-related phenomena in the same way as if they were displaced by war or human rights abuses? The short answer, today anyway, is no.