The Security Council today expressed its commitment to consider and use the tools of the United Nations system to ensure that warning signals about potential conflicts trigger “early, concrete preventive action,” as senior UN officials urged the body to take up the challenge of helping move the Organization from a culture of reaction towards one of prevention.

Unanimously adopting a resolution ahead of a day-long meeting on conflict prevention, the Council expressed its determination to enhance the effectiveness of the United Nations “in preventing and ending armed conflicts, their escalation, spread when they occur, and their resurgence once they end,” and underlined the overriding moral, political and humanitarian imperatives as well as the economic advantages of taking such a preventive approach.

Emphasizing that the United Nations, including the Security Council, “should heed early warning indications of potential conflict” and ensure prompt and effective action to prevent, contain or end them, the Council in its resolution also affirmed that a comprehensive conflict prevention strategy should include, among others, early warning, preventive diplomacy, mediation, preventive deployment, peacekeeping, and practical disarmament.

Secretary-General Ban Ki-moon, who briefed the Council alongside UN High Commissioner for Human Rights Navi Pillay, said: “There is no more important challenge before us than improving our ability to reach a stronger and earlier consensus. It is time for a new era of collaboration, cooperation and action from the Security Council.”

Mr. Ban said that though the UN had risen from the ashes of “the war to end all wars” and had, over the past 64 years, saved countless lives, “we cannot speak of positive trends when we look at Syria, Iraq, Gaza, South Sudan, the Central African Republic a Ukraine and elsewhere.”

Those situations demonstrate not only the changing nature and complexity of contemporary conflict – repeated cycles of turmoil, exacerbating factors such as extreme poverty, weak institutions or terrorism – but also pose a major challenge to the Organization’s prevention work.

“Are our common tools fit for purpose? What must we do better? How can we anticipate what lies ahead?” the UN Chief asked, and added: “The Security Council, which bears the primary responsibility for the maintenance of international peace and security, has a unique responsibility.”

Hard-won experience has taught the international community a number of lessons about what works in prevention, he said, highlighting five relevant points: being present early, including mobilizing effective, unified diplomatic action to diffuse tensions; honing skills in prevention and mediation; building partnerships and coalitions, including regional-level peace and security initiatives; learning from collective mistakes; and empowering the UN Secretary-General to speak on “behalf of a common voice”, drawing on the leverage of the UN Charter.

“Even modest United Nations actions can have an important impact when we have the Security Council’s united support – speaking with one voice – for early engagement,” said the Secretary-General, underscoring: “There are millions of people around the world hoping for and counting on decisive joint action by the one and only global body entrusted with the obligation to maintain international peace and security.”

Providing the Council with a prescription of her own, Ms. Pillay, in her final address before ending her term as UN High Commissioner for Human Rights, said that strengthening civil society actors; increasing participation by women in decision-making and dialogue; and addressing institutional and individual accountability for past violations of human rights, are vital good practises that address both proximate triggers of conflict and root causes.

“And yet, the conflict in Syria is metastasizing outwards in an uncontrollable process whose eventual limits we cannot predict,” she said, adding that other complex and potentially highly eruptive conflicts are underway hammer home the full cost of the international community's failure to prevent conflict.

“They combine massive bloodshed and devastation of infrastructure with acutely destabilising transnational phenomena, including terrorism, the proliferation of prohibited weaponry, organised crime, and spoliation of natural resources.”

But none of those crises erupted without warning. They built up over years – and sometimes decades – of human rights grievances: deficient or corrupt governance and judicial institutions; discrimination and exclusion; inequities in development; exploitation and denial of economic and social rights; and repression of civil society and public freedoms.

Ms. Pillay said early detection systems, such as the 51 experts of the UN Human Rights Council, and systematic scrutiny by UN treaty monitoring bodies, repeatedly alerted us to these shortfalls. “So, although the specifics of each crisis could not necessarily be predicted, many of the human rights violations that were at their core were known. They could have been addressed.”

That was the duty of the relevant states, but when Governments are unable or unwilling to protect their people, it is the responsibility of the international community – and singularly the Security Council – to intervene and deploy a range of measures at its disposal to diffuse the triggers of conflict.

And yet, while the Council’s interest in human rights increased markedly during her tenure, “there has not always been a firm and principled decision by Members to put an end to crises.” Indeed, Ms. Pillay continued, short-term geopolitical considerations and national interest, narrowly defined, had repeatedly taken precedence over intolerable human suffering and grave breaches of – and long-term threats to – international peace and security.

“I firmly believe that greater responsiveness by this Council would have saved hundreds of thousands of lives,” she said, suggesting that use of the veto to stop actions intended to prevent or diffuse conflict is short-sighted in a century where growing challenges face humanity as a whole. “Collective interest – clearly defined by the UN Charter – is the national interest of every State.”

With this in mind, she said the Security Council can take a number of innovative approaches to prevent threats to international peace and security, including further strengthening early warning, by asking for more regular and comprehensive human rights reporting by protection actors; and adopting a standing consensus on a menu of possible new responses to such alerts violations, such as rapid, flexible and resource-efficient human rights monitoring missions, limited in time and scope.

“The laws of the UN are most needed when conflict looms, and this Council has the mandate to address crises before they escalate into threats to international peace and security,” concluded Ms. Pillay.

♦ Receive daily updates directly in your inbox - Subscribe here to a topic.
♦ Download the UN News app for your iOS or Android devices.
Conflict prevention 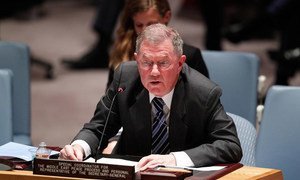 With the latest Gaza ceasefire due to expire at midnight, the United Nations special envoy for the Middle East urged all parties to reach an understanding on a durable truce which addresses underlying issues and breaks the deadlock of violence and retaliation.