UNHCR/T. Fauszt
UNHCR humanitarian aid is loaded onto a Boeing 747 at the Marqa International Airport in Jordan before being flown to Erbil in northern Iraq.
20 August 2014

A United Nations refugee agency cargo jet carrying 100 tons of emergency relief supplies landed at Erbil in Iraq’s Kurdistan region today “in the largest single aid push” in more than a decade, as the top UN official in the country warned against increased targeting of Sunni minorities in the south.

UN Special Representative for Iraq Nickolay Mladenov said he was “particularly alarmed” about the latest spate of abductions and killings that have taken place in different districts in Basra governorate and urged authorities there to investigate these crimes and threats of violence and prosecute those responsible according to law.

“Since 23 June 2014, at least 19 Sunni civilian men have been killed and a further 19 injured in a spate of targeted killings and abductions,” according to a press release issued today by the UN mission in Iraq (UNAMI).

“Anonymous threats have also been issued to several mosques and a prominent Sunni organization, warning Sunnis to leave Basra or face death,” the statement continued. “In recent days, the houses of Sunni citizens in some areas of Abu Khaseeb district, Basra Governorate, have been marked with an ‘X’ and the external lights have been painted in black. As a result of these threats, many Sunnis are leaving the area.”

Meanwhile, to counter the massive humanitarian crisis in the north, the UN refugee agency launched a major aid push with a 100-ton airlift that landed in Erbil today.

“It’s the largest single aid push we have mounted in more than a decade,” UN High Commissioner for Refugees António Guterres said in an update, adding that the combined volume of the emergency supplies on their way to Iraq was 11,306 cubic metres.

Aboard the Boeing 747 from Amman, Jordan, that landed in Erbil Wednesday afternoon (local time) were 3,300 tents, 20,000 plastic sheets, 18,500 kitchen sets and 16,500 jerry cans – the first consignment in an operation that aims at bringing in 2,410 tons of aid between now and the start of September, UNHCR said.

The aid will target living conditions for almost 500,000 displaced people in the region, many of whom are living rough in unfinished buildings, in parks or by the roadside.

The UN refugee agency said Today’s flight will be followed by three others from Jordan on Thursday, Friday and Saturday, carrying 100 tons each. Aid is also on its way by road and sea, with 175 trucks bringing tents, blankets, plastic tarpaulins, and household items across borders from Turkey, Jordan and Iran from UNHCR warehouses in the region and Europe.

Meanwhile, UNICEF’s representative to Iraq announced the signing of a $5 million agreement with the Governorate of Dahuk supporting one-time direct cash assistance to vulnerable, displaced families in the Governorate. This agreement comes as a complement to UNICEF’s mass humanitarian, supply-driven operation of relief and assistance.

Since August 2, UNICEF has dispatched 89 truckloads, or more than 60 metric tons, of humanitarian aid including safe drinking water for 162,000 displaced people, supplementary food (such as high protein biscuits) for 92,000 people, and emergency health kits serving 100,000 people, among other items.

Iraq’s escalating crisis means that the Kurdistan region of northern Iraq is now hosting more than 600,000 internally displaced civilians, including above 200,000 people who have fled the Sinjar area since early August. UNHCR is working closely with humanitarian partners and the Kurdish authorities in the region to deliver aid.

According to UNHCR, across Iraq, an estimated 1.2 million people have been displaced so far this year, including more than 500,000 from fighting in the Anbar region which began in January, and more than 600,000 displaced from conflicts in and around Mosul (since June) and more recently Sinjar. The majority of the newly displaced are in the Kurdistan region of northern Iraq. 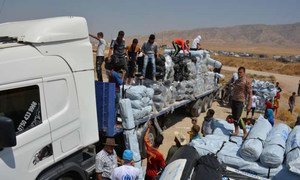