UNHCR/P. Wiggers
South Sudanese refugees sit in the shade of a tree in Ethiopia which hosts more than 600,000 refugees from several countries.
19 August 2014

Ethiopia has surpassed Kenya in hosting the most refugees in Africa, sheltering 629,000 refugees as of the end of July, the United Nations refugee agency announced on Tuesday.

“The main factor in the change in the situation is the increased numbers of refugees fleeing the conflict in South Sudan,” Adrian Edwards, spokesperson for the UN Office of the High Commissioner for Refugees (UNHCR), told journalists in Geneva today.

That conflict, which erupted in mid-December, has sent 188,000 refugees into Ethiopia since the beginning of 2014, he said.

Kenya, however, is still a major country hosting more than 575,000 refugees and asylum-seekers.

According to UNHCR, there are 250,000 South Sudanese refugees in Ethiopia, making them the largest refugee population in the country, followed by Somalis and Eritreans. Over the last seven months, nearly 15,000 Eritreans and more than 3,000 Somalis have also arrived in Ethiopia.

“UNHCR, together with the Ethiopian Government and other partners, are providing protection and humanitarian aid across 23 refugee camps and five transit sites around literally all sides of the country,” said Mr. Edwards, adding that “three of the camps and three transit sites are new… [and] are at capacity, and UNCHR is developing two more.”

Despite continuing humanitarian efforts, heavy rain in Ethiopia remains an urgent challenge, which not only deteriorates the water and sanitation situation, but it also threatens some low-lying sites, with Leitchuor Camp being the most seriously flood-hit shelter.

Some 10,000 refugees, more than one-fifth of its population, have been affected by the underwater tents and shelters and collapsed latrines.

UNHCR and its partners are working to drain the accumulated rainwater into a nearby small stream as quickly as possible, according to Mr. Edwards. “UNHCR continues to work with the Government and the federal and regional authorities to identify additional sites that were less susceptible to flooding,” he said.

With about 25,000 refugees arriving every month in Ethiopia, Mr. Edwards further stressed that most are vulnerable children. To that end, UNHCR is girding up its loins to tackle Hepatitis E, which have spread across South Sudan in the last few years and have appeared in camps in Ethiopia.

In mid-December 2013, conflict sprang from a political impasse between President Salva Kiir and former Vice President Riek Machar, leaving an estimated 1.5 million people uprooted and on the brink of a humanitarian catastrophe.

♦ Receive daily updates directly in your inbox - Subscribe here to a topic.
♦ Download the UN News app for your iOS or Android devices.
South Sudan|Ethiopia 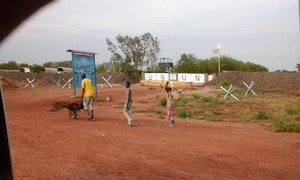 The United Nations mission in South Sudan (UNMISS) has condemned this morning’s outbreak of violence in Bentiu which caused hundreds of people to seek shelter at the nearest airport.