The United Nations is marking World Humanitarian Day today by paying tribute to aid workers who carry out life-saving activities around the world, often in dangerous and difficult circumstances, while celebrating the spirit of humanitarian work worldwide.

“On World Humanitarian Day, we honour the heroic aid workers who rush bravely to help people in need. We remember their sacrifices, and we recognize the millions of people who count on humanitarian workers for their very survival,” Secretary-General Ban Ki-moon said in his message for the Day.

The Day is observed annually on 19 August, the anniversary of the 2003 bombing of the UN headquarters in Baghdad that killed 22 people, including UN envoy Sergio Vieira de Mello. Among today’s events is a wreath-laying ceremony at UN Headquarters in New York to honour aid workers killed in the line of duty.

This year’s observance comes at a time when the number of aid workers killed, kidnapped and seriously wounded has reached the highest number ever recorded, according to new figures published today by the United Kingdom-based organization known as Humanitarian Outcomes.

The research shows that in 2013, 155 aid workers were killed, 171 were seriously wounded and 134 were kidnapped. Overall this represents a 66 per cent increase in the number of victims from the previous year. With 81 aid workers killed in 2013, Afghanistan is still the country with the highest number of attacks.

Preliminary figures show that as of 15 August 2014, 79 aid workers have been killed this year alone. The months of July and August saw a rise in the level of attacks and incidents involving aid workers including in Gaza and South Sudan.

“One aid worker killed in the line of duty is one too many. Nurses, engineers, logisticians and drivers for example all take great risk doing their work in sometimes extremely dangerous and difficult circumstances,” said Valerie Amos, the Under-Secretary-General for Humanitarian Affairs and UN Emergency Relief Coordinator.

“World Humanitarian Day is the day we remember the sacrifices that humanitarian workers make. We also pay tribute to all humanitarians who work to help and support the most vulnerable,” added Ms. Amos, who is attending a memorial service in London for aid workers.

Under the theme, “The world needs more Humanitarian Heroes”, events took place around the world and first-hand accounts were heard from humanitarians working on the front line of the world's most dangerous conflicts.

The Secretary-General listened to accounts by humanitarian workers like Pernille Ironside, who has worked to aid and protect children of Gaza and Ken Payumo, a former New York Police Department (NYPD) officer who spent 10 years in the field in Bor, Sudan, and drew attention to the Humanitarian Heroes website, where hundreds of aid workers tell their stories.

Mr. Ban, as did a representative of the UN refugee agency (UNHCR) at a similar event at the UN Office in Geneva, saluted the drivers who risk their lives working taking humanitarian workers to those in need.

“Let me share with you the words of Gervais Beninga, a driver for the World Food Programme in the Central African Republic, where communal violence has left 2.5 million in need of urgent help,” the Secretary-General said. “Gervais faces serious risks every day. Armed groups could loot his precious cargo. He himself could be targetted for violence and intimidation. Yet is not deterred. As he drives toward people in need, he is driven by the humanitarian imperative.”

The panellists at the New York event included Pernille Ironside, currently working in Gaza with the UN Children’s Fund (UNICEF) to provide support of the local population. She stressed that stressed that United Nations should provide security for all the displaced people in the region.

“It is the population of the region that inspires humanitarian workers,” she said, adding: “A humanitarian is someone who tries to give voice to the voiceless, [so] everyone can take important steps in their lives to help and be a hero for someone.”

Ken Payumo, a former officer with the New York Police Department who has worked in several missions, most recently in South Sudan, where at a UN compound he helped save the lives of over 12,000 civilians.

He stressed that people who would like to help and to make a difference in the world do not need to go far; they could start where they live, right in their local communities. “It doesn’t matter where you are, there is always someone that needs your help” he concluded.

Anthony Lake, the Executive Director of the UN Children’s Fund (UNICEF), noted in a statement that aid workers endure harsh conditions and risk harm to save lives, rebuild communities, and bear witness in conflicts, catastrophes, and crises.

“These emergencies have increased in both frequency and complexity. So, too, has the risk to humanitarian workers – and the death toll among them has risen accordingly,” he said.

Only last month, he pointed out, humanitarian workers were killed in South Sudan by armed fighters while supporting the mission to reach malnourished children before it is too late. In Gaza, aid workers have lost their lives in shelling attacks while providing critical care to the sick, the wounded, and the dying, and comforting families of the dead.

And in Sierra Leone, Liberia and Guinea, health workers trying desperately to save lives in the Ebola epidemic have succumbed to the deadly virus themselves. Others have been threatened with bodily harm for trying to stop the spread of the disease.

“The loss of these heroes is a loss to the entire humanitarian community – and the world,” said Mr. Lake. “On World Humanitarian Day, we mourn their deaths and mark their sacrifice. We also honour the dedication of all the brave women and men who continue to do their jobs every day despite the risks – in the service of our common cause: A more safe, just, and peaceful world.”

UN General Assembly President John Ashe said the Day is not only an opportunity for the international community to celebrate the spirit of humanitarian work, but also to underscore the need to do more, as growing humanitarian crises continue to threaten millions of the most vulnerable communities where lives have been torn apart by war and other natural disasters.

“As we look to implement a new sustainable development agenda, eradicating poverty while maintaining peaceful societies based on an inclusive, people-centred approach will be essential components if we are to achieve success and build a just and prosperous future for all the world's citizens,” he said in a statement.

As part of this year’s celebration of humanitarian action, the UN is shining the spotlight on ‘humanitarian heroes’ – the aid workers themselves – and their stories of life on the frontline of some of the world’s worst and often forgotten humanitarian crises.

♦ Receive daily updates directly in your inbox - Subscribe here to a topic.
♦ Download the UN News app for your iOS or Android devices.
humanitarian day

FEATURE: Giving a voice to the victims of sexual and physical violence

FEATURE: The satisfaction from a lifetime of field work comes at a price 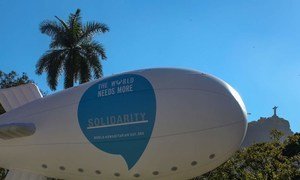