Amidst an expanding displacement crisis in Iraq, several United Nations humanitarian organizations are scaling up efforts to get food and water to people fleeing attacks by the Islamic State (IS).

Briefing the press at Headquarters today, the Secretary-General’s spokesperson Stéphane Dujarric said that the Office for the Coordination of Humanitarian Affairs (OCHA) is increasing its operations on the ground to aid the massive influx of people arriving in the Dahuk Governorate in the Kurdistan region.

According to the UN Refugee agency (UNHCR), Dahuk is hosting some 400,000 displaced Iraqis, including Yazidis, Christians, Shabak, Kakai, Armenian and Turkmen minorities – some of whom have endured repeated displacement. The agency is coordinating with the Kurdistan Regional Government to provide shelter in camps for a minimum of 60,000 people.

Meanwhile, the UN World Food Programme (WFP) and its local partners have doubled the number of field kitchens they now operate across Dahuk. So far, WPF has provided 2.5 million meals.

In addition, the humanitarian situation in Amirli, 200 kilometres south of Erbil, is said to be deteriorating quickly. An estimated 15,000 to 20,000 people reportedly remain inside Amirli, primarily Turkmen Shiites. There have been reports of severe food shortages, and the lack of fuel and power has affected the availability of water.

The Iraqi authorities have requested the assistance of the UN Mission in Iraq (UNAMI) in lifting the siege on Amirli and providing humanitarian relief to the area. The UN has been seeking a way to get food to the area but insecurity is affecting access to assess the situation and deliver aid.

In the meantime, the United Nations Children’s Fund (UNICEF) said that aid organizations are working to improve conditions for Iraqi refugees arriving in Syria. Several thousand children are among an estimated 12,000 Iraqi refugees now sheltering at a camp in Syria after crossing the remote border between the two countries.

UNICEF says conditions have steadily improved, but there are still concerns about the risk of waterborne diseases due to poor sanitary conditions, especially in the current extreme heat. It has delivered more than 3,000 water purification tablets together with other lifesaving supplies at the Nawrouz camp in Syria hosting Iraqi refugees. 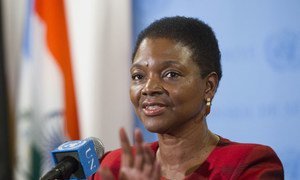 On a visit to Iran, the United Nations humanitarian chief today stressed the importance of regional cooperation in dealing with the myriad of “unprecedented” and “unravelling” crises in the Middle East.