UNHCR/A. Ibrahim
A fork-lift truck driver unloads aid from one of the trucks that crossed from Tunisia to western Libya.
18 August 2014

The United Nations refugee agency said today it has, for the first time, begun sending aid into western Libya from Tunisia to help some of the tens of thousands of people displaced by weeks of fighting in Tripoli.

A first convoy carrying urgently needed medical supplies and relief items from the UN High Commissioner for Refugees (UNHCR) was organized by the International Medical Corps (IMC) on Saturday.

The two trucks set off from Medinine and crossed the border at Ras Ajdir before heading to the town of Zawiya, where some 12,000 people have sought shelter from the fighting in Libya’s capital.

The IMC also sent a second convoy later Saturday of essential medicines and medical supplies to the displaced, who are living in very difficult conditions, UNHCR said. Members of the Taher Al Zawia Organization have been distributing the aid.

“This weekend’s operation is crucial and, we hope, paves the way for other humanitarian aid to reach affected populations who are stranded and in dire need of assistance,” said Saado Quol, UNHCR’s acting chief of mission in Libya.

UNHCR has a warehouse in Tripoli with stockpiles of critical relief items, but the agency cannot access these supplies because of the unstable security situation, which has hampered all its operations in the country since early July, including the provision of assistance to refugees and asylum-seekers.

Tripoli is facing severe fuel and power shortages and this has disrupted services and the distribution of basic goods and supplies, including water, food, cooking oil, baby milk, supplies, and access to banking, said UNHCR.

According to the International Federation of the Red Cross and Red Crescent Societies, at least 2 million people may be at risk of food shortages if the fighting continues in Libya.

The North African nation has been embroiled in some of the worst fighting since the 2011 uprising that ousted former leader Muammar al-Qadhafi and set the country on a transition to democracy.

Yesterday, the UN Support Mission in Libya (UNSMIL) condemned the “grave escalation” in the fighting in Tripoli and its suburbs and urged all parties to work towards an immediate cessation of hostilities. 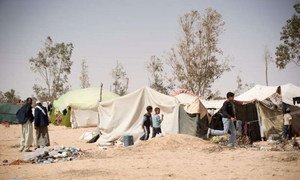 The United Nations mission assisting Libya today condemned the grave escalation in the fighting in the capital, Tripoli, and its suburbs and urged all parties to work to put an end to the security deterioration, which forebodes serious consequences on the humanitarian level.