The United Nations mission assisting Libya today condemned the grave escalation in the fighting in the capital, Tripoli, and its suburbs and urged all parties to work to put an end to the security deterioration, which forebodes serious consequences on the humanitarian level.

The United Nations mission assisting Libya today condemned the "grave escalation" in the fighting in the capital, Tripoli and its suburbs and urged all parties to work to put an end to the security deterioration, which forebodes serious consequences on the humanitarian level.

In a statement from Tripoli, the UN Support Mission in Libya (UNSMIL) said it "strongly denounced the shelling of residential neighbourhoods, which has inflicted casualties among civilians, forced them out of their homes and caused damage to property."

The Mission said it deeply regrets that there has been "no response to the repeated international appeals" and its own efforts for an immediate ceasefire. Continued fighting poses a serious threat to Libya's political process, as well as to the security and stability of the country.

UNSMIL would continue to work "in spirit of impartiality and transparency, and to ensure Libya's national interest." To that end, it appealed to all parties to cooperate with efforts to end the bloodshed and stave off further losses. Tackling the current crisis starts with an immediate cessation of hostilities, the mission said.

Libya has been embroiled in some of the worst fighting since the 2011 uprising that ousted former leader Muammar al-Qadhafi and set the North African nation on a path to democratic transition.

UN humanitarian agencies have recently warned that living conditions in the country are steadily deteriorating. Food, fuel and electricity are in diminishing supply while indiscriminate shelling of heavily populated areas in both Tripoli and Benghazi have resulted in the death or injury of civilians, including children. 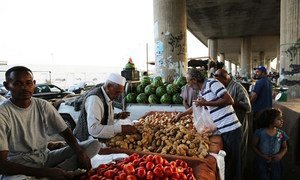 The United Nations human rights office today expressed deep concern over the situation in Libya, where a conflict between multiple armed groups has been raging primarily in Benghazi and Tripoli.