UNMIL
A sign outside the Monrovia City Corporation in Liberia aims at preventing the spread of Ebola.
15 August 2014

Health workers at Ebola outbreak sites are seeing evidence that the numbers of reported cases and deaths vastly underestimate the magnitude of the crisis as they work around the clock to stop the disease from spreading, according to the United Nations World Health Organization (WHO).

WHO, in its latest update on the Ebola outbreak in West Africa dated August 14, said no new cases have been detected in Nigeria, attributing the outcome to extensive contact tracing and monitoring, implemented with support from the United States Centres for Disease Control and Prevention (CDC).

Elsewhere, the outbreak is expected to continue for some time, WHO said.

The most recent statistics compiled by WHO show that the outbreak of Ebola in West Africa continues to escalate, with 1975 cases and 1069 deaths reported from Guinea, Liberia, Nigeria, and Sierra Leone.

But WHO also said: Staff at the outbreak sites see evidence that the numbers of reported cases and deaths vastly underestimate the magnitude of the outbreak.

On the humanitarian side, the UN World Food Programme (WFP) is delivering food to the more than one million people locked down in the quarantine zones, where the borders of Guinea, Liberia, and Sierra Leone intersect, and several countries have agreed to support the provision of priority food staples for this population.

The UN Childrens Fund (UNICEF), in a blog post from Sierra Leone on the joys of survivors of the deadly disease, says that Ebola survivors can play a valuable role in dispelling myths and in gaining community support in the fight against Ebola.

Some people in Sierra Leone still have not accepted that Ebola is real. While many survivors fear stigma, some are now coming forward and telling their brave stories, wrote UNICEF consultant Jo Dunlup.

WHO said it is mapping the outbreak in great detail, to pinpoint areas of ongoing transmission and locate treatment facilities and supplies.

CDC is equipping the hardest-hit countries with computer hardware and software that will soon allow real-time reporting of cases and analysis of trends, according to the UN agencys update.

WHO Director-General Dr. Margaret Chan in Geneva regularly meets with ambassadors from United Nations missions based in the Swiss city to identify the most urgent needs within countries and match them with rapid international support.

UN Secretary-General Ban Ki-moon has appointed Dr. David Nabarro as Senior United Nations System Coordinator for Ebola, in support of the work done by the WHO team.

WHO has expressed its disappointment that some airlines have stopped flying to West Africa. It is hard to save lives if we and other health workers cannot get in, WHO has said.

WHO has repeatedly said the Ebola virus is highly contagious but not airborne. Transmission requires close contact with the bodily fluids of an infected person, as can occur during health-care procedures, home care, or traditional burial practices, which involve the close contact of family members and friends with bodies. 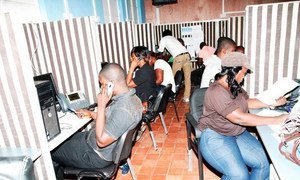 The United Nations World Health Organization (WHO) today sought to allay fears amid reports that airlines are suspending flights over the Ebola outbreak by sending out a social media messages with assurances that “unlike infections like influenza and tuberculosis, Ebola is not airborne.”