WHO/J. Caminade
The 24-hour Ebola Emergency Call Centre in Sierra Leone located inside the Ebola Operations Centre at the WHO compound in the capital Freetown.
14 August 2014

The United Nations World Health Organization (WHO) today sought to allay fears amid reports that airlines are suspending flights over the Ebola outbreak by sending out a social media messages with assurances that “unlike infections like influenza and tuberculosis, Ebola is not airborne.”

The agency, which also gave a press conference providing "clarifications" on air travel, has declared the current outbreak in West Africa a public health emergency of international concern, while UN Secretary-General Ban Ki-moon has appointed Dr. David Nabarro as Senior United Nations System Coordinator for Ebola, in support of the work done by WHO Director-General, Dr. Margaret Chan and her team.

According to the latest WHO update, between 10 and 11 August, 128 new cases of Ebola virus disease, as well as 56 deaths, were reported from Guinea, Liberia, Nigeria, and Sierra Leone, bringing the total number of cases to 1,975 and deaths to 1,069.

The agency said in that update that contact tracing in Guinea, Nigeria, and Sierra Leone has resulted in a range between 94 per cent and 98 per cent of contacts of Ebola cases being identified and followed-up, but in Liberia, efforts are underway to strengthen contact tracing, but help is needed in this area.

WHO today said it is disappointed when airlines stop flying to West Africa. It is “hard to save lives if we and other health workers cannot get in,” the health agency tweeted following a press conference.

WHO has repeatedly said the Ebola virus is highly contagious – but not airborne. Transmission requires close contact with the bodily fluids of an infected person, as can occur during health-care procedures, home care, or traditional burial practices, which involve the close contact of family members and friends with bodies.

The highest Ebola virus level is found in a dead body, according to WHO, hence, currently the highest risk of Ebola transmission is during burial ceremony. 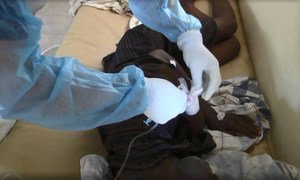 Secretary-General Ban Ki-moon today convened a United Nations system-wide coordination meeting in response to the current Ebola outbreak in West Africa, which is now affecting more than 1 million people in the so-called “hot zone of disease transmission” on the borders of the three countries most impacted by the disease.