UNHCR
The distribution of tents and non-food aid continues as the population of Newroz camp grows as more and more Yazidis arrive from Mount Sinjar in Iraq.

14 August 2014
The United Nations has designated its highest level emergency for the humanitarian crisis in Iraq, citing the scale and complexity of the situation, which is impacting tens of thousands of people that have been forcibly displaced by the armed group, Islamic State (IS).

The “Level 3 Emergency” designation will “facilitate mobilization of additional resources in goods, funds and assets to ensure a more effective response to the humanitarian needs of populations affected by forced displacements,” said the Special Representative of the UN Secretary-General for Iraq, Nickolay Mladenov.

UN officials are particularly concerned about the situation on Sinjar Mountain, where families remain trapped and the health conditions are quickly deteriorating.

Among them, Marzio Babille, the UN Children’s Fund (UNICEF) Representative in Iraq, who also confirmed that the agency and other humanitarian actors are stepping up efforts to meet the growing needs of those who are being extracted from the Mountain, while helping a further 12,000 displaced Christians sheltering in the Kurdish capital, Erbil.

The town of Zakho near the Turkish border is hosting some 100,000 displaced Iraqis, mainly from Sinjar and Zumar, who fled in the previous week. The UN Refugee Agency (UNHCR) said that the Dohuk Governorate, in which Zakho is located, is now hosting close to 400,000 displaced Iraqis, including Yazidis, Christians, Shabak, Kakai, Armenian and Turkman minorities – some of whom have endured repeated displacement.

In addition, the UN Population Fund (UNFPA) is working the local authorities and partners to distribute hygiene supplies and clothing to more than 1,300 pregnant women, and medical supplies to support 150,000 people.

There are only three other countries in the world that share a Level 3 emergency status: Central African Republic, South Sudan, and Syria.

Speaking by telephone from Iraq on behalf of the UN Office for the Coordination of Humanitarian Affairs (OCHA), Kieran Dwyer said the priority status will allow aid workers to “do everything to save lives right now.”

“Humanitarian organizations, in a time that there are so many crises, have to be able to prioritize,” said Mr. Dwyer. “It means that when we make decisions about rapidly mobilizing staffing and resources… Iraq is right up there in the top priority for immediate emergency action now.”

The decision to raise the level was made by a coordinating body comprised of UN representatives and non-governmental organizations. Based on Mr. Dwyer’s briefing, the decision was made in the context of the 1.2 million people displaced in Iraq since January, coupled with the rapidly deteriorating security situation that continues to cause people to be displaced.

Earlier today, the UN official visited Dohuk Governorate and spoke with people displaced, as well as aid workers and local officials, about the situation on Sinjar Mountain.

There are at least several thousand people still on the mountain, Mr. Dwyer said. He confirmed, however, that based on accounts from local authorities, “large numbers” of people were able to come off the mountain in the last few days.

The support of the international community and the commitment of the regional authorities are “extraordinary,” he said, but more needs to be done to provide the displaced people with the protection and the shelter they urgently need.

According to the spokesperson, Mr. Eliasson recognized the serious plight of religious minorities in Iraq at the hands of so-called Islamic State forces. He expressed his deep compassion for the victims and affected communities.

He assured the delegation that the United Nations is now taking urgent humanitarian action. He also underlined the need for global solidarity and support to address the needs of these afflicted communities. 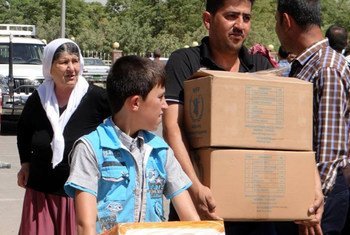 13 August 2014
Two senior United Nations officials today condemned in the strongest terms the “barbaric acts” of sexual violence and “savage rapes” the armed group Islamic State (IS) has perpetrated on minorities in areas under its control.