Secretary-General Ban Ki-moon today convened a United Nations system-wide coordination meeting in response to the current Ebola outbreak in West Africa, which is now affecting more than 1 million people in the so-called “hot zone of disease transmission” on the borders of the three countries most impacted by the disease.

According to the latest update issued today by the World Health Organization (WHO), between 10 and 11 August, 128 new cases of Ebola virus disease, as well as 56 deaths, were reported from Guinea, Liberia, Nigeria, and Sierra Leone, bringing the total number of cases to 1,975 and deaths to 1,069.

WHO Director-General Dr. Margaret Chan gave a bleak assessment on the current Ebola outbreak in West Africa during a briefing yesterday to UN Member States in Geneva, saying the outbreak has placed every city with an international airport at risk of an imported case, and “no one is talking about an early end to the outbreak.”

“Decisions to seal off the hot zone of disease transmission, that is, the area where the borders of Guinea, Liberia, and Sierra Leone intersect, are critical for stopping the reinfection of areas via the cross-border movement of people,” Dr. Chan said.

“More than one million people are affected, and these people need daily material support, including food,” she said. “The isolation of this zone has made it even more difficult for agencies, like MSF [Médecins Sans Frontières], to bring in staff and supplies.”

At UN Headquarters today, the Secretary-General chaired a UN system-wide coordination on Ebola and stressed the need for the entire UN system to support the WHO’s efforts in combatting the outbreak.

On Tuesday, Mr. Ban appointed Dr. David Nabarro as Senior United Nations System Coordinator for Ebola, in support of the work done by Dr. Margaret Chan and her team to counter the outbreak, which the agency has designated a “public health emergency of international concern.”

Dr. Nabarro, who joined the meeting with the Secretary-General today from Geneva with the WHO Director-General, will be responsible for ensuring that the UN system makes an effective and coordinated contribution to the global effort to control the outbreak of Ebola.

Also Tuesday, a 12-member ethics panel convened by WHO announced that it is ethical to treat Ebola patients with experimental drugs to counter the largest, most severe and most complex outbreak of Ebola virus disease in history.

On the operational side, WHO says it is finalizing its strategic operations response plan and expects to share this with countries and partners in the coming days. Mapping is also underway to develop an operational picture in order to coordinate and move people and materials to areas of greatest need.

The UN health agency says that standard measures, like early detection and isolation of cases, contact tracing and monitoring, and rigorous procedures for infection control, have stopped previous Ebola outbreaks including those in Uganda, the Democratic Republic of the Congo, as well as Gabon, and can do so again.

Six months into the outbreak, fear is proving to be the most difficult barrier to overcome. Fear causes contacts of cases to escape from the surveillance system, families to hide symptomatic loved ones, and patients to flee treatment centres.

The Ebola virus is highly contagious, but is not airborne. Transmission requires close contact with the bodily fluids of an infected person, as can occur during health-care procedures, home care, or traditional burial practices, which involve the close contact of family members and friends with bodies. 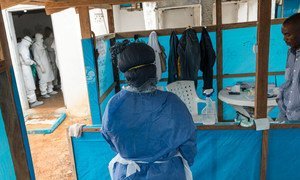 A 12-member ethics panel convened by the United Nations health agency today reached “unanimous consensus” that it is ethical to treat Ebola patients with experimental drugs to counter the largest, most severe and most complex outbreak of the virus in history.