Iraqi Red Crescent/UNOCHA
Iraqi refugee children who fled from Tal Afar and found shelter in schools, mosques and unfinished buildings in the area of Sinjar, in Ninawa governorate.
12 August 2014

A group of United Nations human rights experts today expressed grave concern at the imminent danger of massacre faced by the Yazidi population forced to flee Sinjar in northern Iraq and other minority communities currently exposed to attacks by members of the armed group, Islamic State (IS).

“All possible measures must be taken urgently to avoid a mass atrocity and potential genocide within days or hours – civilians need to be protected on the ground and escorted out of situations of extreme peril,” Special Rapporteur on minority issues, Rita Izsák, said in a news release.

The experts on the rights of minorities, internal displacement, summary executions, freedom of religion and violence against women are calling for immediate action to protect the human rights of Yazidis and other affected communities.

They have said that the situation continues to deteriorate rapidly with some 40,000 members of the Yazidi community trapped on Mount Sinjar, threatened with death by the IS and without access to food and water.

“We are witnessing a tragedy of huge proportions unfolding in which thousands of people are at immediate risk of death by violence or by hunger and thirst,” warned the Special Rapporteur on the human rights of internally displaced persons, Chaloka Beyani.

“Humanitarian aid must be delivered quickly and no efforts should be spared to protect all groups forcefully displaced by this conflict,” he added.

The UN has received verified reports that the armed group is systematically hunting down members of minority groups who remain trapped in areas under their control and giving them the ultimatum, “convert or die,” stated Christof Heyns, Special Rapporteur on extrajudicial, summary or arbitrary executions.

“We cannot stand by in the face of such atrocities. International actors must do all in their power to support those on the ground with the capacity to protect lives,” he urged.

“We have reports of women being executed and unverified reports that strongly suggest that hundreds of women and children have been kidnapped – many of the teenagers have been sexually assaulted, and women have been assigned or sold to IS fighters as ‘malak yamiin’ or slaves,” said the Special Rapporteur on violence against women, Rashida Manjoo.

Forty Yazidi displaced children died last week due to dehydration, according to UNICEF. Over the past weeks an estimated 250,000 members of religious minorities have been forced to flee their homes escaping from the advance of IS and associated armed groups. 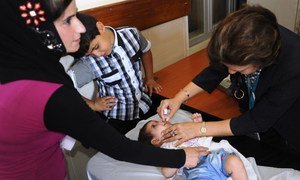 Amidst ongoing insecurity in northern Iraq, Secretary-General Ban Ki-moon and his representative in the country expressed support today for President Fouad Masoum’s office, as politicians are working towards creating a new Government, and warned that heightened political tensions could lead Iraq into even deeper crisis.