While fighting between Government forces and armed movements ebbed considerably during the past months, inter-communal violence and acts of banditry continue to be a challenge for the people of Darfur, the African Union-United Nations envoy on the region said today.

Speaking to reporters in Khartoum, African Union-United Nations Joint Special Representative and Joint Chief Mediator, Mohamed Ibn Chambas, said that violence and acts of criminality have also made it difficult for peacekeepers to carry out their mission and posed a threat to the safety and security of humanitarian personnel.

Some 385,000 people have been displaced by the conflict since the beginning of 2014, according to UN Country Team and the Office for the Coordination of Humanitarian Affairs (OCHA).

“The plight of these internally displaced people (IDPs) is compounded by the reduced presence of humanitarian actors and the reduction of humanitarian assistance on the ground as a result of capacity gaps, funding shortfalls and the fragile security environment,” he said.

However, despite these challenges, humanitarian access has improved, Mr. Chambas said. According to OCHA, there were 51 attempts in July to reach various affected areas in Darfur. Of these, the authorities declined only two humanitarian access requests to reach Adila and Abu Karinka in East Darfur State. Similarly for the reporting period there were 21 access denials for the Joint AU-UN Mission in the region (UNAMID) compared to 72 in the previous quarter.

“UNAMID continues to extend technical, logistic and programmatic support to the local Government and traditional institutions to raise awareness and improve the protective environment for vulnerable populations in Darfur,” he said.

Recalling his trip to New York last week to brief the UN Security Council on the latest developments in Darfur, he said that the Council also noted with concern the upsurge inter-communal conflict and urged UNAMID, which he heads, to continue with its increasing robust protection of civilian strategy.

The Council expressed support to the Doha Document for Peace in Darfur, which includes launching of the Darfur Internal Dialogue and Consultation and the formation of a 17-member Implementation Committee to lead the process and ensure local ownership.

For his part, Mr. Chambas said he intensified coordination with the African Union High-level Implementation Panel and the Special Envoy of the United Nations Secretary General to Sudan and South Sudan, President Mbeki and Haile Menkerios respectively, as called for by both the African Union Peace and Security Council and the UN Security Council. A proposed meeting would involve the representatives of the armed groups and the Government of the Sudan.

“This meeting is expected to explore ways of addressing the humanitarian and security situation in Darfur; deliberate on how the parties can bridge their differences and make progress towards a comprehensive settlement of the Darfur conflict,” he said. v

UNAMID has embarked on a comprehensive set of reforms set out in Security Council resolution 2148 (2014), which serves as an opportunity to re-evaluate the structure of the Mission through a review of civilian, military and police components.

“We are looking forward to the renewal of the Mission’s mandate, so that a more efficient and agile UNAMID is able to better serve and support the people of Darfur in their pursuit of peace, stability and prosperity,” Mr. Chambas added. 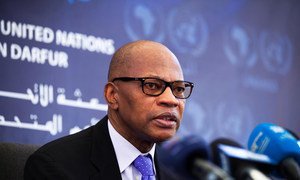 The challenge for the international community remains how best to impress upon all the parties involved in the Darfur conflict that a military solution and the status quo are untenable, the African Union-United Nations envoy on the region said today, urging the Security Council to play a more proactive role in supporting the holding of a successful national dialogue in Sudan.