Sergio Vieira de Mello was one of the 22 people killed and more than 150 people wounded in the bombing of the UN headquarters in Baghdad in 2003.

That attack prompted the UN General Assembly to proclaim August 19 each year as World Humanitarian Day to celebrate the spirit of humanitarian work around the world.

“The recent attacks witnessed in Gaza and South Sudan is a reminder of the bravery of aid workers,” Louis Belanger, spokesperson for World Humanitarian Day 2014, told the UN News Centre, referring to the months of July and August that saw an alarming rise in the level of attacks and incidents involving humanitarian workers. “Humanitarians often take great risk to help communities in need and they deserve to be protected.”

Humanitarians work on the frontlines of every emergency in support of more than 100 million people whose lives have been torn apart by war or natural disasters, and 2013 set a new record for violence against civilian aid groups in the number of attacks. The first half of 2014 has also seen a rise in the number of targeted attacks on humanitarian workers.

“The killings, kidnaping and violent attacks must end,” said the WHD spokesperson.

“World Humanitarian Day is the one day in the year that we turn the spotlight on them and honour the work that they do,” he said. ”People should be aware that aid workers are often the target and work in difficult conditions. World Humanitarian is about paying tribute to them and recognize that true humanitarian spirit.”

As part of World Humanitarian Day 2014, a new platform to inspire and mobilize the public on global emergencies will be launched. The site – Messengers of Humanity - will build a community of thousands of advocates that will be called upon to take action by sharing inspiring content on social networks.

“More People Than Ever Before Need Our Help” reads the website, reflecting the fact that there are now 108 million people in need of humanitarian assistance with more people displaced by violence worldwide than ever before. And as is often the case, civilians -- many of them children and women -- are the ones paying the price with an overwhelming level of violence directed against them in armed conflicts.

Under the theme “Humanitarian Heroes,” events to mark the day will take place around the globe, including commemorations across the globe for the aid workers killed in service, film screenings, debates in universities and art exhibits.

For example, there will be a wreath-laying ceremony in honour of aid workers who have lost their lives in the service of others planned at Westminster Abbey in London; a ceremony to unveil a plaque with the names of UN staff who were killed in the Algiers bombing of 2007; a public event in Japan involving high-school students who have been studying how to save vulnerable people from future earthquakes; a 5K run/walk to highlight the courage, resilience and strength of humanitarian heroes in Somalia; and film festivals in East and West Africa featuring the work of humanitarians. 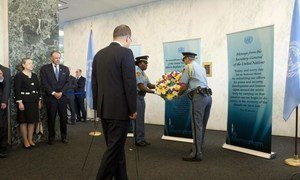