UNHCR/M. Hofer
A Syrian refugee mother waits in line with her child to collect aid in Arsal, Lebanon.
8 August 2014

As violence escalates in Lebanon, the United Nations refugee agency (UNHCR) and its partners are distributing humanitarian supplies in the north-eastern Bekaa Valley to both Lebanese and Syrian refugees who had fled the town of Arsal, close to the Syrian border.

The agency’s spokesperson, Arianne Rummery said today that UNHCR has been working together with Lebanese Government and other partners to provide humanitarian aid, including hygiene and baby kits, mattresses, blankets, bread and canned food, to the refugees.

According to the Lebanese municipal authorities, the clashes that began on Saturday have displaced over 2,000 Lebanese and Syrians, mainly women and children. They are currently sheltering in private houses, community centres and schools in Bekaa towns such as Al Marj, Bar Elias and Baalbek.

The agency stressed that due to security reasons access to Arsal remained limited, causing shortage of food stocks and baby supplies. While electricity remains cut off, preventing pumping of water from wells, the water supply is also precarious.

UNHCR is also concerned about the low number of medical supplies in Arsal, where primary care and mobile medical unit have been mostly suspended. Humanitarian agencies have dispatched mobile medical units to areas and towns in the Bekaa hosting those displaced from Arsal.

In a news release, UNHCR noted that those who were able to flee the town cited security concerns, including the risk of being caught in crossfire, as the main reason for leaving their homes.

Since the beginning of the conflict in Syria four years ago, UNHCR has registered 42,000 Syrian refugees who fled from Arsal, which was also a home town for some 35,000 Lebanese civilians.

Lebanon currently hosts more Syrian refugees than any other country, with UNHCR having registered 1.2 million, equivalent to more than a quarter of Lebanon's resident population. 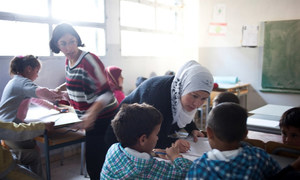 The top United Nations relief official in Lebanon today strongly condemned attacks on the Lebanese Armed Forces and the ongoing fighting in and around the city of Arsal, in the northeastern part of the country near its border with Syria.