Based on an a tentative deal reached between the two sides, whose political dispute has sparked eight months of bloodshed in the world’s youngest country, the deadline for setting up an transitional authority of national unity was August 10, and the Council today underscored that the rivals’ actions “continuing to pursue a military solution to this conflict are unacceptable.”

In a Presidential Statement, Council members appealed to the parties to “finalize appropriate arrangements without further delay.” They also expressed their readiness to consider, in consultation with relevant partners, including Intergovernmental Authority on Development (IGAD) and the African Union (AU), “all appropriate measures, including targeted sanctions, against those who take action that undermines the peace, stability, and security of South Sudan, including those who prevent the implementation of these agreements.”

Through its statement , the Council expressed grave alarm and concern regarding the substantial deterioration of the political and security situation and developing humanitarian catastrophe in South Sudan resulting from the internal Sudan People’s Liberation Movement (SPLM) political dispute and unrelenting violence, including against civilians, caused by the country’s political and military leaders since December 15, 2013.

“The Security Council urgently calls upon President Salva Kiir, former Vice President Riek Machar and all parties to implement the Agreement to Resolve the Crisis in South Sudan signed on May 9, 2014 by…South Sudan and the SPLM/A (in Opposition), to engage fully and inclusively in ongoing peace talks in Addis Ababa, and uphold their commitment to establish a Transitional Government of National Unity.”

Further to the statement, the Council strongly condemned violations of human rights and international humanitarian law and reminds the parties that under international law, such acts constitute war crimes or crimes against humanity.

Regarding the humanitarian situation, the Council underlines the deep concern about the dramatic food insecurity in South Sudan, which may result soon in famine. The Council calls on UN Member States to provide the funds for humanitarian agencies deliver promptly relief to desperate people and communities. 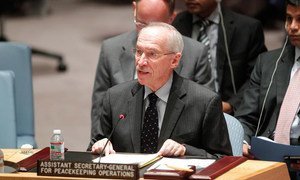 A senior United Nations peacekeeping official today warned that after just three years of independence, South Sudan is now on the brink of a humanitarian catastrophe and a protracted internal conflict.