UNSMIL/Abbas Toumi
Shoppers at a market in the Libyan capital Tripoli.
8 August 2014

The United Nations human rights office today expressed deep concern over the situation in Libya, where a conflict between multiple armed groups has been raging primarily in Benghazi and Tripoli.

“Living conditions for civilians in both cities had steadily deteriorated, with food, fuel and electricity in diminishing supply,” Ravina Shamdasani, spokesperson for Office of the High Commissioner for Human Rights (OHCHR), told journalists in Geneva today.

She said frequent indiscriminate shelling of heavily populated areas in both cities by the rival sides has been reported, leading to the death or injury of civilians, including children. Meanwhile, health facilities have been severely affected by the violence and common criminality was on the rise.

“Armed groups from both sides had taken prisoners and OHCHR was receiving initial reports of torture that it was investigating. In addition, attacks against media professionals continued,” Ms. Shamdasani said.

OHCHR reminded all parties involved in the hostilities that under international law indiscriminate attacks were are crimes, as are attacks on civilians or civilian objects such as airports – unless such facilities are being used for military purposes. Torture is also a war crime.

“The direct perpetrators of any such crimes in Libya, as well as commanders who ordered or failed to stop the commission of such crimes, could be prosecuted, including by the International Criminal Court (ICC). There should be no impunity,” she stressed.

OHCHR has appealed on all sides to immediately end all violations of international law and to engage in peaceful dialogue to resolve their differences.

A newly elected Libyan parliament met for the first time this week, in hopes that the political leaders would bring peace to the North African nation, which has been embroiled in some of the worst fighting since the 2011 uprising that ousted former leader Muammar al-Qadhafi. 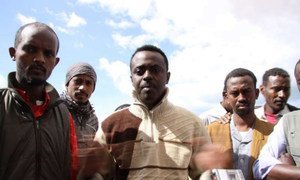 As violence escalates in Libya, the United Nations today said it was deeply concerned for the safety of thousands of refugees and asylum-seekers who are currently stranded in areas heavily damaged by the continuous fighting.