Two senior UN officials warned today that although the security situation in the Democratic Republic of Congo (DRC) has vastly improved since this time last year, it remains fragile and the gains are “not irreversible.”

Briefing the Security Council this morning, the Secretary-General’s Special Representative in the DRC and the head of the UN mission there (MONUSCO), Martin Kobler, recalled that in August 2013, the “M23 [armed militia] was knocking on the gates” of Goma, the main city in the vast country’s restive eastern region.

“I am pleased to note some tangible progress. A number of armed groups have been sent to the history books. Others will follow. In addition, a growing number of Congolese

can envision a better future. These positive developments constitute the foundations of a lasting peace in the Great Lakes region.”

Last year, he recalled daily reports of killings, rapes and displacement, causing suffering among the population. Last August, Council had condemned the bloody attacks by the Allied Democratic Forces (ADF) on Congolese citizens, which forced 66,000 people to flee their homes. In addition, last year the Democratic Forces for the Liberation of Rwanda (FDLR) activity in eastern DRC was on the rise, with reports of attacks on Rwanda territory as well.

The situation is now very different, Mr. Kobler pointed out. “Today, through joint efforts of Congolese military and the UN force, the M23 is no more. Today the FARDC [Armed Forces of the Democratic Republic of Congo] – at great cost to its troops – has reduced the ADF to a shadow of its former self.

“Today, almost 4,000 combatants from a mixed bag of Congolese armed groups have surrendered. And today, the FDLR appears to start to voluntarily disarm while almost 500,000 displaced persons have returned to their homes,” he said.

However, he warned that the situation remained fragile and “not irreversible.” The DRC Government believes that there are still 1,500 FDLR combatants in the country. He expressed concern that their leadership was largely ignoring orders by multiple parties to transfer the first groups out of preliminary camp. This was preventing further disarmament.

“I suggest joint military operations against the FDLR factions that do not want to disarm and take action against those who continue to violate human rights,” said Mr. Kobler, adding that “standing still means we are moving backwards.”

The longer the process takes, the higher the risk that rival armed groups may seek to replace the FDLR in liberated areas, he warned.

He also expressed deep concern over the massacre of 33 people in Mutarule on 3 June. The National Police and Army as well as MONUSCO failed to intervene although they were close to the location. He stressed the need for “accountability for inaction,” and said that the incident brought to light that it is not enough to be present - one has to act to protect civilians.

Also briefing the Council today, Mary Robinson, in her last appearance before the Security Council as Special Envoy for the Great Lakes Region, recalled that welcoming on 31 May the FDLR’s announcement of voluntary surrender.

“However, the process has yet to gain sufficient traction to show it is credible,” she said, adding that while progress has been achieved, much more work is required in the days ahead.

On a larger front, serious challenges confront the progress made in security and development. Under the Peace Security and Cooperation (PSC) Framework, all parties must immediately and effectively address the challenges or else they have the potential to undo the progress achieved, and ultimately undermine peace.

“The PSC Framework offers solutions to cycles of conflicts that were decades in the making. It would not be realistic to expect that solutions would come overnight,” said Mrs. Robinson.

Equally central to the success of the PSC Framework is the full participation of civil society, particularly women and youth, which are too often left out in critical decision making processes, despite their significant proportional stake in the affairs of the region.

She also cited the humanitarian situation, impunity, the plight of refugees and displaced persons, restoration of state authority in the eastern DRC, the acceleration of the reform of the security sector and the process of voluntary disarmament of the FDLR. 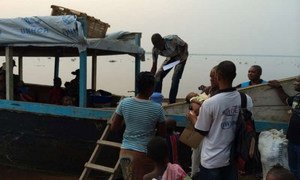 A final group of Congolese refugees have returned to their homes in the northern Democratic Republic of the Congo (DRC) under a voluntary repatriation programme by the United Nations refugee agency.