UN Photo/Mark Garten
The UN flag flies at half-mast at the Organization’s Headquarters in New York, in memory of fallen colleagues who lost their lives in the conflict in Gaza.
7 August 2014

The United Nations flag is flying at half-mast today at the world body's New York Headquarters in memory of the UN staff members killed since the beginning of the conflict in Gaza on 8 July, and in solidarity with the families and friends of those injured.

In Gaza, flags at the UN Relief and Works Agency for Palestine Refugees in the Near East (UNRWA) fields and installations were lowered yesterday in honour of the 11 UNRWA colleagues killed in shellings in Gaza, as well as in Syria and other field operations.

“We are honoured and touched by the many expressions of sympathy and actions of support we have witnessed,” said UNRWA Commissioner General, Pierre Krähenbühl, during an informal briefing yesterday to the General Assembly in New York.

Secretary-General Ban Ki-moon, who participated in the meeting, thanked the staff for their bravery and stressed that attacks against UN premises, along with other suspected breaches of international law, must be swiftly investigated.

UNRWA schools and other buildings have been used as temporary shelters for the nearly 270,000 displaced people throughout the Gaza Strip. On 3 August, a third school in 10 days was hit.

Also today, UN Resident and Humanitarian Coordinator for the occupied Palestinian territory James Rawley emphasized today that following four weeks of hostilities, “the scale of needs is unprecedented in the Gaza Strip.”

Since the conflict began last month, more than 1,300 Palestinian civilians had been killed –including an excess of 420 children and 220 women – and more than 9,000 wounded. Three civilians in Israel were killed. Some of the 520,000 Palestinians who were displaced have since returned to their homes.

Mr. Rawley flagged, “Teams are on the ground assessing needs and providing relief and emphasized the need for a sustained halt to the violence.”

In the last 48 hours, humanitarian workers have been able to deliver food to hundreds of thousands of people and begin vital repairs on water and sanitation infrastructures. Hundreds of tons of refuse have been removed from Gaza’s refugee camps as medical supplies are being re-stocked and more clinics opening.

As search and rescue workers retrieve bodies from previously inaccessible areas, mine risk education is targeting families in locations with the highest contamination of unexploded ordnance. Additionally, emergency psychosocial support is being provided to thousands of children.

Mr. Rawley cautioned, “Without the full lifting of the blockade of the Gaza Strip, Palestinians in Gaza will continue to be deprived of any sense of a normal life and the massive reconstruction effort now required will be impossible.”

Meanwhile, as the three-day ceasefire in Gaza draws to a close, the UN Children’s Fund (UNICEF) reports that families are struggling to cope with the aftermath of 28 days of violence and destruction that has left an estimated 65,000 people homeless.

"Of the last three conflicts in Gaza, this has been the longest, deadliest and most destructive," said June Kunugi, UNICEF Representative in the State of Palestine. "Its human and material toll is beyond words."

More than one fourth of Gaza's residents were displaced during the latest conflict. The three-day ceasefire allowed families to visit their homes, but many had to return to collective shelters when the full extent of the damage to their houses became apparent.

Overcrowding at UN-run shelters, many of them schools, is making it difficult to provide these families with basic needs and clean conditions to prevent the spread of diseases. Diarrhoea and skin diseases among children are on the rise.

Around 400,000 children are showing symptoms of distress, including bed wetting, clinging to parents and nightmares, and need psychosocial support. Half of Gaza's 1.8 million people are children under the age of 18.

From the very first days of the current escalation, UNICEF-supported emergency psychosocial teams have been deployed to provide initial psychosocial support to affected children, reaching 1,870 children across the Gaza Strip so far.

According to UNICEF's latest verified figures, at least 429 children were killed in the last month as a result of airstrikes and shelling, an indication of the devastating toll that the latest escalation of violence has taken on Gaza's youngest and most vulnerable.

Since the ceasefire went into effect on Monday morning, no additional child deaths have been recorded.

At least 2,744 children have also been reported injured. Some of the young victims, who suffered debilitating injuries for which no treatment is available in Gaza, need to be referred for treatment outside the coastal enclave. 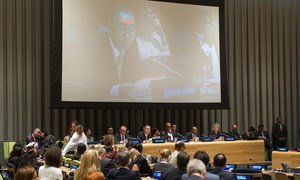 As the temporary ceasefire continues to hold in Gaza, senior United Nations officials today urged Israelis and Palestinians to return to the negotiating table, and called on the 193 Member States to respond to calls for emergency humanitarian funding.