A senior United Nations peacekeeping official today warned that after just three years of independence, South Sudan is now on the brink of a humanitarian catastrophe and a protracted internal conflict.

Briefing the Security Council on the situation there, Assistant Secretary-General for UN Peacekeeping Operations, Edmond Mulet urged the international community to “caution [all parties] with one voice on the consequences of impeding the peace process.”

An estimated 1.5 million people have been uprooted in fighting that started with a political impasse in mid-December 2013 between President Salva Kiir and former Vice President Riek Machar. The conflict also sent nearly 100,000 civilians fleeing to UN bases around the country.

“This is a man-made crisis and those responsible for it have been far too slow in resolving it. Both sides continue to believe they can achieve more through the pursuit of a military option,” Mr. Mulet said, explaining that clashes between militia groups continue to intensify causing unimaginable suffering to the South Sudanese people.

Later in the day, Secretary-General Ban Ki-moon condemned in the strongest terms the recent killing of five South Sudanese employees of humanitarian non-governmental organizations in Maban County, Upper Nile state and extended his deepest condolences to their families.

He demanded that relevant authorities conduct a full investigation into these tragic events and called on all armed forces in South Sudan to keep relief personnel and civilians safe from harm. There is no military solution to the crisis in South Sudan, he said and emphasized that all parties must immediately cease their military operations to find a peaceful resolution to the conflict.

In that regard, the Secretary General welcomed the resumption, on 4 August, of talks in Addis Ababa under the auspices of the Intergovernmental Authority on Development (IGAD) and urged all parties to engage in a meaningful dialogue and advance the political process. He added that the visit of the UN Security Council to South Sudan in August “will bring international attention to the dire humanitarian situation as well as the plight of the South Sudanese people.”

Some 3.9 million civilians are facing alarming levels of food insecurity, amidst growing concerns of a famine. Meanwhile, among the more than million people have been internally displaced by violence, some 434,000 have fled across borders. Up to 50,000 children are at risk of dying as a consequence of acute malnutrition this year alone. And the cholera epidemic continues to grow with more than 5,300 cases and 115 deaths.

While humanitarian assistance has reached some 2.4 million people, aid efforts have been hampered by insecurity, obstructed access, and insufficient funding. Mr. Mulet warned that the deteriorating humanitarian situation also carries with it security implications as communities begin to compete for diminishing resources.

To make the situation even worse, militia are targeting aid workers. On Monday, five South Sudanese humanitarian workers of Nuer ethnicity were killed by a community-based self-defence militia calling itself the Mabanese Defence Forces.

Further, recent fighting in Upper Nile state has also forced UN humanitarian personnel to seek shelter at compounded of UN agencies. Non-essential UN personnel is currently being airlifted from the area, which will delay and hamper the delivery of much needed relief.

Mr. Mulet said that heavy rains have severely flooded large areas exacerbating the health and sanitation situation. In addition, a number of incidents have compromised the safety of UN personnel there. Additional resources and financing is urgently needed in order to sustain relief operations.

To that end, MR. Mulet welcomed the deployment of additional troops under Security Council resolution 2155 (2014). As of 4 August, a total of 3,525 out of the 5,500 surge troops have been deployed. Additional police units are also expected to arrive within the next six months.

Meanwhile, he said, UNMISS will continue providing logistical support to the Intergovernmental Authority on Development (IGAD,) which is currently mediating negotiations between the Government and the SPLM/A in opposition. Having resumed on 4 August, the talks are focussing on security issues and implementation of the Cessation of Hostilities Agreement.

One of the core challenges is be to align positions of all IGAD member States on the application of sanctions against those who continue to undermine the peace process. The visit of the UN Security Council to South Sudan next week is particularly timely in this regard, said Mr. Mulet. 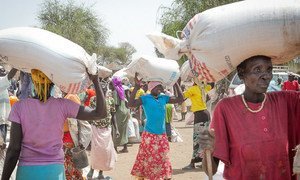 A unit of United Nations peacekeepers is heading to South Sudan’s Maban County after at least five South Sudanese humanitarian workers were killed earlier today by a community-based self defence militia calling itself the Mabanese Defence Forces.