UNICEF/Guy Yogo
Nigerians on the island of Choua in Chad's inaccessible lac region.

5 August 2014
The United Nations refugee agency today sounded the alarm on behalf of the nearly 1,000 people who recently arrived in the uninhabited Chadian island of Choua after fleeing attacks by Boko Haram in northern Nigeria.

According to the office of the UN High Commissioner for Refugees (UNHCR), the island of island of Choua, in Lake Chad, is about four kilometres from where the borders of Chad, Nigeria and Niger intersect.

Refugees arriving there reported that they have fled violence and attacks on their village that resulted in the destruction of their houses and food reserves. The group, which included mainly women and children, is in urgent need of food, water, shelter and medical care.

Ariane Rummery, (UNHCR) spokesperson, told the press in Geneva today that the people were from Nigerian city of Kolikolia, in strife-torn Borno State.

She said that at the request of the Government of Chad, the refugees would be relocated to the safer and more accessible hosting area in Ngouboua, some 30 kilometres from the border, where a number of Nigerian refugees and Chadian returned refugees already lived among hosting villages. Meanwhile, UNHCR and its partners have sent aid packages – including high energy biscuits, water purification kits, mosquito nets, communal tents, sleeping mats and other household items – to Ngouboua.

Ms. Rummery added that UNHCR is establishing a field office in the Lake Chad area to monitor the situation, coordinate the response with partners on the ground, and ensure protection and assistance to refugees.

He said that a humanitarian mission in early May had identified over 1,000 Nigerian refugees and over 360 Chadians who had fled Nigeria earlier in 2014. Since 2009, around 3,000 people had fled Nigeria for Chad. 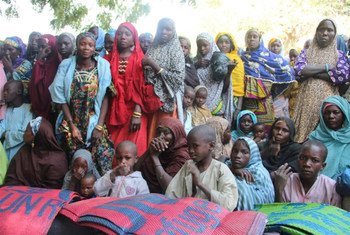