UNHCR/I. Zimova (file)
A UNHCR staff member asks a displaced Ukrainian man about the situation in his native Donetsk region, which has been heavily affected by the conflict.
5 August 2014

“In the past seven days more than 6,200 people have been forced from their homes,” Vincent Cochetel, the Director for the European Bureau at the UN Refugee Agency (UNHCR) told reporters in Geneva today.

“The current lack of a systematic and uniform system hampers the coordination and implementation of relief efforts. This is also important as the Ukrainian authorities make their preparations for winter. Most of the current shelters in use are not suitable for the cold winter months,” he added.

The call for a unified registration system for IDPs was repeated by John Ging, Director of Operations for the UN Office for the Coordination of Humanitarian Affairs (OCHA), who briefed the Security Council later in the day.

Among other points, he also called for humanitarian assistance to be exempted from Ukrainian taxes, more efficient entry into Ukraine for humanitarian workers, as well as for easier transfer of WHO-certified medical supplied into the region.

“Until the violence is ended, we will continue to see an increase in the numbers [of people] being killed and a deterioration in the overall humanitarian situation,” he warned.

The inability to reach Ukrainians in need is impeded by badly affected humanitarian corridors, travel through which is regularly impeded.

“We call on all sides to this conflict to enable free and safe movement of the population while at the same time ensuring full access by humanitarian organizations to affected populations remaining behind,” Mr. Ging told the 15-member Council.

Meanwhile, the number of people displaced from the Luhansk and Donetsk eastern regions had risen sharply from 2,600 in early June to 102,600 at the start of this month. People from eastern Ukraine now make up 87 per cent of the country’s total displaced population while those from the Crimea region number some 15,200 people.

UNHCR also reports that a larger number of Ukrainians are arriving and staying in Russia under the visa-free regime. The Russian authorities estimate that around 730,000 Ukrainians, including the 168,000 seen by the Federal Migration Service, have arrived since the beginning of the year under this programme.

People fleeing eastern Ukraine face increasing difficulties, including access to banking services. Basic infrastructure has been heavily affected by the violence, with scarcity of drinking water becoming increasingly common. According to UNHCR, many houses and buildings have been partially or totally destroyed by conflict in the Donetsk and Luhansk regions.

Some people have also expressed fears of persecution for their political views or ethnicity, while others are worried about forced recruitment by either side. Some talked of incidents of abduction, extortion and harassment in their neighbourhoods. And most Ukrainians leaving their country are not applying for refugee status for fear that it would lead to complications.

For its part, UNHCR has started a cash assistance programme to support more than 700 IDPs in the Lviv and Vinnytsia regions. It has also delivered hygiene items and cooking supplies to some 15,000 returnees in Slavyansk, Donetsk region.

Last week, the agency signed an agreement with the Donetsk authorities to open a field office in Mariupol to distribute aid to the most vulnerable displaced people. The first delivery of aid, including food, took place last week in the town of Yalta and another shipment is planned in the coming days.

Cochetel said UNHCR was seeing a mixed picture of displacement with a significant increase of people fleeing violence around Horlivka, Donetsk and Luhansk as well as a substantial number of returns to areas where the Ukrainian government has regained control. Some 4,000 people have returned from the Kharkiv region to Slavyansk and Kramatorsk during the last week while some 20,000 people have reportedly returned to Slavyansk since July 5. 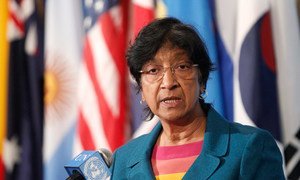 The shooting down of a Malaysian Airlines plane over eastern Ukraine may amount to a war crime, the United Nations High Commissioner for Human Rights today said today, releasing a new report that details a total breakdown of law and order and a reign of fear and terror inflicted by armed groups in the area.