The United Nations children’s agency today said it is working with governments, the private sector and local communities to make it easier for women to breastfeed their infants, and to end false marketing of breast milk substitutes.

“In many cases there are wrong statements and wrong sentiments that tend to show that infant formula is as good as breast milk and this is totally wrong and we don’t want that to happen,” said the UNICEF Regional Nutrition Advisor for Equatorial and Southern Africa, Noel Marie Zagre.

Speaking to UN Radio, Dr. Zagre said that all too often people talk about breastfeeding in general terms but the issue is to breastfeed “effectively.” That means putting the child on breast milk an hour after birth and then exclusively breastfeeding for the first six months of life.

“The infant should be receiving only the milk from his mother and not receiving anything else, whether it is water or any other liquids,” Mr. Zagre said, explaining that other liquids reduce the amount of nutrient-rich breast milk that an infant can consume.

After six months, quality foods can be introduced to the diet but a mother can continue to supplement the baby’s diet with breast milk, he added.

Dr. Zagre said UNICEF and its partners are working in support of legislation to make it easier for women to exclusively breastfeed.

“In some countries, many women are working outside the household, in factories, in the field, and they just don’t have even the time for breastfeeding,” he said. “For example, some of them are in factories and don’t have maternity leave or if they have it, it’s so short that they do not have enough time to take care of the young baby and ensure that this young baby has a good start in life.”

According to UNICEF and the UN World Health Organization (WHO), breastfeeding is the foundation of good nutrition, reducing the risk of malnourishment in early childhood and the risk of obesity later in life. Breast milk can contribute to reducing 20 to 25 percent of newborn mortalities, according to the UN agencies.

In addition, by supporting nutrition and strengthening the bond between mother and child, breastfeeding also supports healthy brain development.

The theme of this year’s World Breastfeeding Week, which is celebrated from 1 to 7 August, is “Breastfeeding: A Winning Goal – for Life!” The theme highlights the link between breastfeeding and the achievement of the anti-poverty targets known as the Millennium Development Goals, particularly MDGs 4 and 5 to improve maternal and child health.

The Week aims to raise knowledge of and interest in breastfeeding, whose practice remains uneven throughout the 170 countries whose mothers nurse.

“Clearly we have some evidence that many countries are not yet doing very well even though we know that we have also observed a lot of progress in some other countries,” Dr. Zagre said. “Up to now some countries are still having a very low exclusive breastfeeding rate like five per cent while others are doing quite well and even reaching 89 to 95 per cent of exclusive breastfeeding for the first six months of life.”

Since 1990 the number of children under the age of five dying from preventable causes declined by a remarkable 47 per cent. But nearly 7 million young children still die every year, and over 40 per cent of them are newborns.

Some countries have made progress – reaching 80 and 90 percent of exclusive breastfeeding for the first six months of life. However, other nations lag behind. While 82 percent of children are breastfed until one year, but only 45 percent are exclusively breastfed, he said, emphasizing the need to bridge that gap. 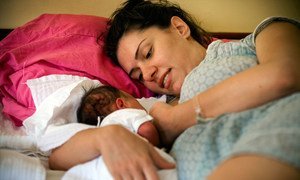 The best thing a mother can do for her newborn is breastfeed – which does more than help children survive, it helps them to thrive with benefits that last a lifetime, said the United Nations today, kicking off World Breastfeeding Week.