Asia-Pacific countries will gather in Bangkok this week for the annual policy session of the United Nations Economic and Social Commission for Asia and the Pacific (ESCAP), focusing on the role of regional connectivity in supporting economic growth and development.

With a particular focus on the three dimensions of sustainable development – social, economic and environmental – senior Government officials from over 40 member countries and associate member countries will meet at ESCAP's 70th session today through 6 August, ahead of the Commission's high-level ministerial segment, which will run from 7 to 8 August, to be attended by Heads of State and senior ministers.

In a press release kicking off the annual session, ESCAP says that more than 30 ministers from Asia and the Pacific are expected to participate in the ministerial segment.

In addition, Ministers from Cambodia, Indonesia, India, Myanmar, Philippines, Pakistan, Mongolia, Kazakhstan, Sri Lanka, Solomon Islands and Tonga will be among key speakers at panel discussions during the high-level session this week, focusing on steering the region towards equitable, environment-friendly and resilient growth.

The ESCAP session is being held against the backdrop of high public debt levels and declining international development assistance, which has affected Asia-Pacific growth and contributed to rising income inequality, both within and between countries in the region.

A Ministerial Round Table on the theme of the 70th session, “Regional connectivity for shared prosperity”, on the opening day of the ministerial segment will focus on transport, ICT and energy connectivity and multi-sectoral and cross-border cooperation.

At a media launch on 6 August, ESCAP Executive Secretary Shamshad Akhtar will present the key findings of the Economic and Social Survey of Asia and the Pacific 2014, the Commission's flagship publication, outlining the latest macroeconomic projections and policy advice for the region.

On the second day of the ministerial segment, Asia-Pacific Government leaders and policymakers will join a panel discussion on sustainable development and development finance to suggest policy options for addressing existing and emerging vulnerabilities.

Key events during the week, including all panel discussions, will be webcast live at http://www.unescap.org/commission/webcast.

The Commission session can also be followed on social media using the hash tag #CS70.

♦ Receive daily updates directly in your inbox - Subscribe here to a topic.
♦ Download the UN News app for your iOS or Android devices.
Pacific 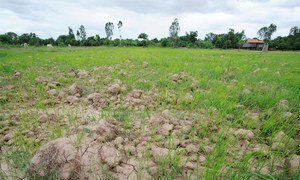 Although drought is a “silent killer” in Asia and the Pacific, access to scientific information and knowledge remain a challenge for many countries in the region, the United Nations Economic and Social Commission for Asia and the Pacific (ESCAP) said today at a milestone forum on drought monitoring and early warning.