UN Photo/Gill Fickling
South Africa's reliance on coal is clear to see. The coal-mining process can leave water supplies unusable for irrigation, for industry and for consumption. The water is not just dirty, but toxic.
1 August 2014

The world faces a looming energy problem. There’s not enough of it. It also faces a looming climate change problem. Too much of it. Could natural gas and fracking technology be part of the solution to both challenges?

The answer to this question is especially relevant for developing countries. Nearly half the world’s population lacks reliable access to modern energy services and more than 20 per cent of the global population – 1.4 billion people – remains without access to electricity, according to a recent UN Development Programme (UNDP) report. Household air pollution from the use of biomass fuel is expected to cause more than 1.5 million deaths a year by 2030.

Could natural gas, whose production is boosted by hydraulic fracturing or “fracking” – the process of drilling and injecting fluid into the ground at a high pressure to fracture shale rocks to release natural gas inside – be a bridge to greener economies and to new, more-efficient energy technologies?

“Is fracking, by providing natural gas, giving us a cleaner energy source? The answer is yes, perhaps, if you regard natural gas as a cleaner energy source,” said Elizabeth Thompson, senior advisor for Secretary-General Ban Ki-moon’s Sustainable Energy for All Initiative. She spoke at a panel organized by the UN Academic Impact. “However, if the methodologies used are dirty, or environmentally harmful, then some of the beneficial impacts are significantly eroded.”

In the fight against climate change, natural gas is increasingly being eyed as a potential ‘bridge’ fuel to a carbon-free economy. It is believed to be less harmful to the environment than coal or oil because it emits less carbon dioxide. What’s more, it is abundant, especially when fracking provides access to unconventional reserves of gas, particularly in the United States, where the technology has been developed and where it has created about 1.7 million jobs.

Opposition around the world to the environmental and health risks associated with fracking has been loud but hardly unanimous. South Africa is currently debating the practice. In a reversal of a ban earlier this year, the European Union approved some fracking activities. China and Russia are supporters, so much so that recent media reports actually accuse Russia of funding anti-fracking campaigns in Europe in order to undercut the competition. Argentina is keen but lacks resources and technology, according to media reports, and in the United States, policies on fracking vary state to state.

Given these divides, the UN is proposing to use its reach to develop expertise and literature to educate decision makers.

“The UN does not intervene in State or country business. We will wait for countries to make decisions, supporting them in making the correct policy decisions,” Ms. Thomas stressed.

Michael Levi, an expert on energy and the environment at the Council on Foreign Relations, who also participated in the panel discussion, said the UN’s role could be to facilitate the spread of technical understanding and regulatory experience, building networks among regulators, rather than promoting its own set of rules.

“The best way the UN can play a role here is in helping countries set a direction that allows them to take advantage of a variety of low-carbon energy sources, including natural gas, if that’s what they think is appropriate,” he told the UN News Centre. “And in facilitating the relationships and the connections that allow regulators and planners to better handle development.”

The UN is pushing to finalize by next year an international treaty to tackle climate change, in time for a meeting in Paris of States parties to the world body’s framework Convention on climate change. Ahead of those talks, Mr. Ban is hosting a summit this September, and has asked participating world leaders to come with concrete action plans. Could fracking for natural gas be included in those plans?

“I don’t think fracking should be the focus of the climate talks, just like nuclear energy or solar power isn’t the focus,” Mr. Levi said. “The focus is on reducing emissions and for a long time, it’s been on setting the right direction, putting the right framework in place and then letting countries figure out the best way to cut emissions.”

“So it strikes me that a good outcome to the climate negotiations can help set countries in a lower-carbon direction, which many might decide includes a substantial role for natural gas.”

In April, the UN Intergovernmental Panel on Climate Change (IPCC) released a long-anticipated report stating that global greenhouse gas emissions are on trajectory to continue rising.

To keep global mean temperatures within two degrees Celsius – the benchmark determined in the mid-1990s of what would constitute “dangerous” climate change impacts – the world would need to lower by mid-century global greenhouse gas emissions by 40 to 70 percent compared with 2010 levels. The goal is to achieve near-zero increases by the end of this century, according to the report, which featured input from more than 1,100 leading scientists and economists.

According to the reportClimate Change 2014: Mitigation of Climate Change, to aim for that goal, the use of fossil fuels, which is currently at more than 80 per cent, would need to be cut to as little as one-third.

“Greenhouse gas emissions from energy supply can be reduced significantly by replacing current world average coal-fired power plants with modern, highly efficient natural gas combined-cycle power plants or combined heat and power plants, provided that natural gas is available and the fugitive emissions associated with extraction and supply are low or mitigated,” according to the report.

Unconventional natural gas reserves, the authors added in Chapter 7, are estimated to be larger than conventional reserves and resources combined.

The IPCC working group that compiled the survey was not endorsing a fracking boom, as some media sources claimed, but rather highlighting that that it would be possible to limit current warming, through political will and the use of existing technologies.

In the same report, the authors noted that there is international opposition to fracking, and expressed concern about its potential risks to local water quality and public health.

Fracking technology has developed over the past three decades or so, but moved to commercial scale in the last several years. It involves drilling – vertically and then horizontally – to create a well, then pumping millions of liters of chemically-infused water, and then sand, through the horizontal well to break fractures in the shale rock layers to release the embedded gas and force it to the surface. The combination of this mixture is considered a trade secret.

On average, Ms. Thomas said, each well that is “fracked” uses up to 8 million gallons of water, and a fracking fluid of 40,000 gallons that uses some 600 volatile organized compounds. The concern is that the concoction can seep into under-ground water supplies, as well as water that is at the surface level when the brine is not properly disposed of.

There are also worries about deteriorating air quality because of how technologies are used and managed. The sudden shift underground, sometimes caused by explosives, has also been found to cause earthquakes.

In addition to disposal of waste water from the wells and air quality, communities can have a negative reaction to the sudden, intensive industrial development.

A utility pole supporting electrical wires in Bac Ha, Viet Nam. According to the Millennium Development Goals (MDG) Report, 1.6 billion people the world over, or a quarter of humanity, live without electricity. UN Photo/Kibae Park

“It happens most often in places that have not had that before and are not used to it, which has more to do with urban planning, education, and proper infrastructure, than with making sure people have the right valves and are monitoring the air quality properly,” Mr. Levi said.

Mr. Levi pointed to evidence that many of the technical claims offered by Ms. Thomas were incorrect.

“The telegenic risks are not necessarily the ones for policy makers to confront,” he said, referring to popular videos showing television reporters lighting fire to tap water contaminated by methane gas. Methane is believed to be found in the same area as natural gas and brought to surface in the extraction process.

There is one more set of UN talks on the climate scheduled for this year. In early September, the UN will hold in Apia, Samoa, a conference on the challenges and opportunities of partnering with small islands. These sea-locked nations are among the most vulnerable countries to the impacts of climate-change, and also face unique energy challenges. Could fracking be an option for energy production there?

“Fracking is not yet at the stage where it is being looked at by small island Governments,” said Ms. Thompson, is the former Minister for Energy and Environment in Barbados.

“But it is exactly in places like that and in Africa where I would be very concerned about a raise and a demand or the use or spread of fracking simply because of a lack of capacity to oversee, regulate and supervise, and to deal with the technologies.

Yet, while fracking may not have a role in energy production in those countries, the senior UN official interviewed noted that natural gas does hold important possibilities for the future of energy production.

Ms. Thomas represents the UN’s Sustainable Energy for All Initiative. Its three goals are to ensure universal access to modern energy services, and double the global rate of improvement in energy efficiency and the share of renewable energy in the global energy mix, all by 2030.

“If fracking and natural gas are being used as an end in themselves, then clearly there will be no transition to greener fuels,” said Ms. Thomas. Companies will maintain the status quo, using technology to access larger amounts of natural gas, using it alongside coal.

“If, however, the larger policy roulette frames the issue in the context of the need to transition to a greener fuels as alternative technologies because fossil fuels, no matter what technologies we use, are finite,” she added, “then it could be potentially the bridge between the ‘brown’ economy we have now and the green economy of the future.

“But we would have to go to the point where the UN is interested in seeing this – increased innovation, new technologies and greater efficiencies that allow energy to reach all people, become empowered, and enjoy an improved quality of life.” 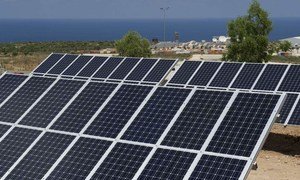 Launching the United Nations Decade of Sustainable Energy for All, Secretary-General Ban Ki-moon today hailed modern energy services as the source of profound and life-changing opportunities – for the poorest communities and the richest investors – and urged generating the innovative ideas and vital partnerships to wholly transform the global energy landscape.