Ban ‘shocked’ at collapse of Gaza ceasefire, urges maximum restraint by all parties

UNICEF/NYHQ2014-0978/El Baba
On 19 July 2014 in the State of Palestine, passing the rubble of homes destroyed in an Israeli air strike, a girl uses a hand truck to transport jerrycans filled with water, in the town of Rafah in southern Gaza.
1 August 2014

Strongly condemning the reported violation by Hamas of the mutually agreed humanitarian ceasefire which commenced this morning in the Gaza Strip, United Nations Secretary-General Ban Ki-moon also expressed deep concern about renewed Israeli attacks on the tiny enclave, which have reportedly killed more than 70 Palestinians.

“He is shocked and profoundly disappointed by these developments,” said Mr. Ban’s spokesperson, Stéphane Dujarric, reading out a statement at UN Headquarters on the collapse of a humanitarian ceasefire brokered by the UN and the United States to help end nearly a month of violence.

On Thursday, the UN reported that all parties had agreed to a 72-hour ceasefire in the conflict in the Gaza Strip, brokered by Secretary-General Ban Ki-moon and United States Secretary of State John Kerry. A halt in fighting would allow for the immediate and necessary delivery of aid to civilians deeply affected by the recent violence.

Underscoring that the UN has no independent means to verify exactly what happened to derail the pause, the spokesperson said that, according to the latest reports, two Israeli Defence Forces (IDF) soldiers were killed and one taken captive after the humanitarian ceasefire came into effect.

“This would constitute a grave violation of the ceasefire, and one that is likely to have very serious consequences for the people of Gaza, Israel and beyond,” he said, adding: “Such moves call into question the credibility of Hamas' assurances to the United Nations. The Secretary-General demands the immediate and unconditional release of the captured soldier.”

Further to the statement, the Secretary-General expressed deep concern about the resumption of Israeli attacks on Gaza and the killing of over 70 Palestinians this morning. “Instead of giving both sides, especially Gazan civilians, a much needed reprieve to let them attend to their injured, bury their dead and repair vital infrastructure, this breach of the ceasefire is now leading to a renewed escalation,” he said.“The Secretary-General urges both sides to show maximum restraint and return to the agreed 72-hour humanitarian ceasefire that tragically lasted such a brief period of time,” said the spokesperson, adding that the UN chief also urges those with influence over the parties “to do everything” to convince them to observe the humanitarian ceasefire.

Earlier in the day, the UN Special Coordinator for the Middle East Peace Process expressed deep concern about the serious consequences that could arise following the violation by the parties to the Gaza conflict of the humanitarian ceasefire.

In a statement issued in Jerusalem, Robert Serry said he was informed by the Israeli authorities of a serious incident this morning after the start of the humanitarian ceasefire, involving a tunnel behind IDF lines in the Rafah area of the Gaza Strip. Two soldiers Israeli were reportedly killed, as well as a number of Palestinians.

“The United Nations is not in a position to independently confirm these reports. However, if corroborated, this would constitute a serious violation of the humanitarian ceasefire in place since 8 am this morning by Gazan militant factions, which should be condemned in the strongest terms,” he said.

Mr. Serry urged the Palestinian parties to last night's understanding to urgently reaffirm their commitment to the humanitarian ceasefire and pledged to continue his efforts to contain the violence and the risk of renewed escalation.

According to the UN, nearly four weeks of conflict have left more than 1,300 Palestinians dead and 6,000 injured. Israel has faced rocket fire, and hostilities have resulted in the deaths of 3 civilians and 56 soldiers, with dozens injured.

Meanwhile, the UN Humanitarian Coordinator for the Occupied Palestinian Territory, James W. Rawley, along with the Minister of Social Affairs and Agriculture of the State of Palestine, Shawqi Issa, have appealed for $369 million to meet urgent needs in Gaza.

“Ongoing hostilities in Gaza, including bombardment and combat in heavily populated areas, have severely limited the ability of medical staff to save lives, of aid workers to meet needs, or for technicians to repair damage to infrastructure vital to the population. This must stop,” Mr. Rawley urged.

The Gaza Crisis Appeal focuses on supporting access to health and water as well as catering for the needs of the displaced people in Gaza, including food assistance, blankets and mattresses as well as psychosocial support.

“A strong mobilization of resources is required to meet the most urgent needs, particularly those stemming from the massive number of displaced persons and those arising from wide-scale damage to infrastructure,” said Mr. Rawley.

“But resources will mean little if the blockade on Gaza and the denial of Palestinian rights continue. As a first step, all humanitarian agencies should receive safe passage or safe access.”

The Appeal is the first step of humanitarian community to meet the most urgent needs that have arisen as a result of the current emergency in Gaza. The immediate focus is delivering life-saving supplies to the most vulnerable namely displaced persons, the injured, the elderly, children, women, and farmers and fishermen who have lost their livelihoods. 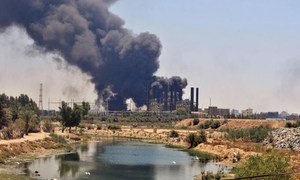 All parties have agreed to a 72-hour ceasefire in the conflict in the Gaza Strip, United Nations Secretary-General Ban Ki-moon and United States Secretary of State John Kerry announced on Thursday, culminating the latest diplomatic push to end the deadly violence that has gripped the tiny enclave for nearly a month.