UN-OHRLLS
Ministerial Conference on New Partnerships for the Development of Productive Capacities in LDCs, comes to an end in Cotonou, Benin.
31 July 2014

At the closing today of a conference in Cotonou, Benin, ministers, senior Government officials and United Nations representatives called on donor countries to fulfil their commitments and go even further, by allocating at least 50 percent of their overseas development assistance (ODA) and “aid for trade” disbursement, to the world’s least developed countries (LDCs).

“Many least developed countries, despite being rich in human and natural resources, have been trapped in a low level of equilibrium,” said the United Nations High Representative for LDCs, Landlocked Developing Countries and Small Island Developing States.

In a press release from his office, Gyan Chandra Acharya added that enhancing productive capacities, improving infrastructure and promoting inclusive growth are essential to eradicating poverty and ensuring a prosperous future for the world’s most vulnerable countries.

Over the course of the four-day conference, delegates raised serious concerns over a drop in aid to the LDCs and discussed proposals to enhance the ability of poor countries to overcome structural constraints, especially in the UN post-2015 development agenda. They agreed that a greater level of global support through aid, market access and investment would assist in the increased production of goods and services and improve trade performance.

“This will also help them build better resilience. As we prepare to embark upon the post-2015 development agenda, we have heard a clarion call from all the participants for priority focus on these issues in the LDCs,” Mr. Acharya said.

Participants also called for a greater use of modern technology to leapfrog some of the traditional development stages including through a planned “technology bank” with regional centres.

They also highlighted the principle of shared responsibilities and the need for greater collaborating among Government, the private sector and civil society.

The meeting also saw the launch of several initiatives including the South-South global assets and technology exchange platform as well as the UN Decade on Sustainable Energy for All. The latter will provide an opportunity for LDCs to seek new partnerships in the energy sector to improve their ability to trade and produce goods, Mr. Acharya said. 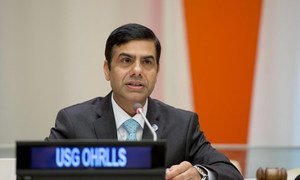 With the kick-off of the United Nations post-2015 sustainable development agenda fast approaching, ministers and senior Government officials from across the globe have gathered in Cotonou, Benin, today to discuss how to strengthen the world’s 48 least developed countries to produce more goods and trade in international markets more efficiently.