All parties have agreed to a 72-hour ceasefire in the conflict in the Gaza Strip, United Nations Secretary-General Ban Ki-moon and United States Secretary of State John Kerry announced on Thursday, culminating the latest diplomatic push to end the deadly violence that has gripped the tiny enclave for nearly a month.

Reading a statement at Headquarters in New York, UN spokesperson Stéphane Dujarric told reporters that Mr. Ban and Mr. Kerry had announced that the UN Representative in Jerusalem, Special Coordinator Robert Serry, has received assurances that “all parties have agreed to an unconditional humanitarian ceasefire in Gaza.”

“This humanitarian ceasefire will commence at 8 am local time on Friday, August 1, 2014. It will last for a period of 72 hours unless extended. During this time, the forces on the ground will remain in place,” said Mr. Dujarric.

“We urge all parties to act with restraint until this humanitarian ceasefire begins, and to fully abide by their commitments during the ceasefire.”

The spokesperson went on to say that the pause is critical to giving innocent civilians a much-needed reprieve from violence. During this period, civilians in Gaza will receive urgently needed humanitarian relief, and have the opportunity to carry out vital functions, including burying the dead, taking care of the injured, and restocking food supplies. Overdue repairs on essential water and energy infrastructure could also continue during this period.

“Israeli and Palestinian delegations will immediately be going to Cairo for negotiations with the Government of Egypt, at the invitation of Egypt, aimed at reaching a durable ceasefire,” he said, adding that the parties will be able to raise all issues of concern in these negotiations.

“We thank key regional stakeholders for their vital support of this process, and count on a continued collaborative international effort to assist Egypt and the parties reach a durable ceasefire as soon as possible,” Mr. Dujarric added.

News of the ceasefire comes as UN relief officials urged the parties to protect civilians amid the ongoing conflict, which has resulted in thousands of casualties and caused widespread displacement and destruction.

“The reality of Gaza today is that no place is safe,” Under-Secretary-General for Humanitarian Affairs Valerie Amos said in her briefing to the Security Council on the latest situation.

“We have all watched in horror the desperation of children, of civilians as they have come under attack,” she added, speaking via videoconference from Trinidad and Tobago.

Nearly four weeks of conflict have left more than 1,300 Palestinians dead and 6,000 injured, Ms. Amos reported. Over 80 per cent of those killed have been civilians; 251 children. Israel has faced rocket fire, and the hostilities have resulted in the deaths of 3 civilians and 56 soldiers, with dozens injured.

She noted that the current crisis in Gaza takes place against the backdrop of decades of instability, poverty and vulnerability resulting from repeated outbreaks of hostilities and the ongoing blockade on land, air and sea.

Over 80 per cent of Gaza’s population of 1.8 million – more than half of them children under the age of 18 – were already dependent on humanitarian aid before the outbreak of hostilities.

Up to 440,000 people in Gaza are now displaced, almost 24 per cent of the population. Over 240,000 are being hosted in schools run by the UN Relief and Works Agency for Palestine Refugees in the Near East (UNRWA), while others are seeking refuge wherever they can; in government buildings, hospital grounds or with families and friends.

“People flee to areas they believe are safe from attack. But these areas are becoming harder to find,” said Ms. Amos, who is also UN Emergency Relief Coordinator.

“So, they come to United Nations facilities for protection when their homes and neighbourhoods come under fire – more than 240,000 people. But over 103 UN facilities have come under attack including an UNWRA school hosting over 3,300 displaced yesterday,” she stated.

“The parties to the conflict have an obligation – an absolute obligation – to protect civilians from direct or indiscriminate attacks. Under international law, United Nations operations, personnel and premises, must remain inviolable, and parties to the conflict should protect humanitarian workers. There can be no justification for failing to do so.”

Ms. Amos said the relief effort is “stretched,” with ongoing fighting and insecurity hampering the ability of UN agencies to move around and making it difficult to sustain the delivery of assistance to people in need.

“Until a longer-term ceasefire is agreed, we need more humanitarian pauses to enable us to reach those in need. Pauses must be daily, predictable, and adequate in length so that humanitarian staff can dispatch relief to those in need, rescue the injured, recover the dead and allow civilians some reprieve so that they can restock and resupply their homes.

“We urgently need the Government of Israel, Hamas and other militant groups to comply with their international legal obligations, including international humanitarian and human rights law. Each party must be held accountable to international standards; not the standards of the other party,” Ms. Amos added.

Briefing the Council from Gaza City, UNRWA Commissioner-General Pierre Krähenbühl said the most difficult challenge facing the Agency today is the hundreds of thousands of Palestinians it is currently hosting.

“We are doing everything possible to provide the displaced with minimum needs – food, mattresses and blankets – but we are now into the fourth week of mass displacement in facilities unequipped to shelter large numbers for such a duration,” he told the Council via teleconference.

“Conditions are increasingly dire in the shelters,” he continued. “There is no water for personal hygiene, very few showers and latrines are totally inadequate. Disease outbreak is beginning, with skin infections, scabies and others. There are thousands of pregnant women in our schools, deliveries are precarious and we are sheltering newborns in these appalling conditions. Our ability to mitigate this situation is of course heavily restricted by ongoing hostilities.”

Stating that the current reality on the ground is not sustainable, Mr. Krähenbühl renewed his call for an immediate and unconditional ceasefire to be agreed by the parties. 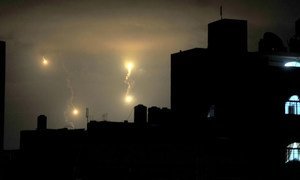 As another United Nations school serving as a shelter for Palestinians in Gaza was hit by shells this morning, killing children, senior UN officials strongly condemned the attacks and warned against the targeting of civilians.