On World Day against Trafficking in Persons, UN calls for action to eradicate scourge

UNHCR
Young girls attending a school at the Shagarab Refugee camp in eastern Sudan where thousands of asylum-seekers, refugees and migrants are at risk of being trafficked every year.
30 July 2014

Emphasizing that the practice of slavery still plagues modern society, the United Nations marked its first-ever World Day against Trafficking in Persons by calling on the international community to end impunity for perpetrators and help victims, especially women and children, who continue to be particularly vulnerable to the perfidious trade.

Emphasizing that the practice of slavery still plagues modern society, the United Nations marked its first-ever World Day against Trafficking in Persons by calling on the international community to end impunity for perpetrators and help victims, especially women and children, who continue to be particularly vulnerable to the perfidious trade.

“Most of those trafficked are vulnerable women and children deceived into a life of suffering. They are exploited for sex and forced to work in conditions akin to slavery,” said Secretary-General Ban Ki-moon in his statement to mark the World Day.

Millions of people are trafficked a year – women, men and children sold and forced to work in sweatshops, fields and brothels. The purposes of trafficking in persons range from forced and bonded labour to various forms of sexual exploitation, forced marriage, organ removal and other contemporary practices similar to slavery. And women and children account for three quarters of identified victims.

Calling for an end to a “callous” industry that preys on the most vulnerable and their hopes for a better life, Mr. Ban stressed the need to stop traffickers in their tracks not only by severing funding pipelines and seizing assets but also by addressing deeper underlining issues.

“Enforcement, cross-border cooperation and information-sharing can all be effective, but ending human trafficking also means tackling the root causes,” he said. “Extreme poverty, entrenched inequality and a lack of education and opportunity create the vulnerabilities that traffickers exploit – ultimately, the best protection is to accelerate development for all.”

Mr. Ban urged countries that have not yet done so, to ratify and fully implement the UN Convention against Transnational Organized Crime and its Protocol on Trafficking in Persons. On this Day, it is especially imperative to send a message of hope to survivors, he said, emphasizing the need to support the Trust Fund for the Victims of Trafficking in Persons- established by the UN General Assembly in 2010 in line with the Global Plan of Action to tackle trafficking.

Echoing that sentiment, Yury Fedotov, the Executive Director of the UN Office for Drugs and Crime (UNODC) said that traffickers turn people into commodities and, despite international efforts, continue to operate with impunity.

“Not a single day goes by without a fresh report of women, men and children being sold into modern-day slavery; forced to work in sweatshops, fields and brothels, hidden in plain sight in the richest countries in the world, and in the poorest,” he said.

According to the UNODC, the vast majority of trafficked persons are women, accounting for 55 to 60 per cent. And recent data shows that more and more detected victims are children, particularly girls under the age of 18. Convicting traffickers is essential to signal worldwide that such actions will never be tolerated, Mr. Fedotov said.

Also remarking on the World Day, UN High Commissioner for Human Rights Navi Pillay highlighted the need to expose traffickers, safeguard vulnerable children, women and men, and protect the victims – people who have been pressed into servitude, and often exposed to abuse.

“They may be young women who have been enslaved as prostitutes or abused as unpaid domestic workers. Girls and boys who have been forced to beg and steal on the street, or exploited in dangerous and back-breaking work. Men who have been trapped in everlasting servitude, in conditions that no human being should have to endure,” she said.

Every Government has a responsibility to fight human trafficking, Ms. Pillay added. In supplier countries, victims are frequently made vulnerable to traffickers through discrimination based on ethnic origin or gender. These include teenage runaways, migrants, or members of discriminated minority groups. And in receiving countries, trafficking is fuelled by demand for goods and services derived from exploitation, such as prostitution or products made cheaply by people who are not paid a living wage.

“We owe [these people] respect, care, and remedy – insofar as it is possible to recover from such experiences and be compensated for such wrongs,” Ms. Pillay said. 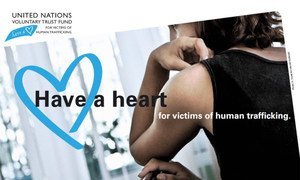 Human trafficking has no place in the modern world, the President of the General Assembly declared today at a special event at United Nations Headquarters ahead of the observance of the first ever World Day against Trafficking in Persons.