UNRWA
A young boy stands in the ruins of a house which was destroyed during an air strike in Central Bureij refugee camp in the Gaza Strip.
29 July 2014

The United Nations chief made the appeal in a statement issued last night by his spokesperson, after leaflets were reportedly dropped by the Israeli Defence Forces in the northern Gaza Strip warning tens of thousands of residents to leave their homes and evacuate to Gaza City.

“If true, this would have a further devastating humanitarian impact on the beleaguered civilians of those areas of the Gaza strip who have already undergone immense suffering in recent days,” said the statement.

It added that UN agencies in Gaza do not have the resources on the ground to cope with, or provide assistance to, an enormous extra influx of desperate people.

“The Secretary-General strongly urges all sides to avoid any further escalation at this time. He notes that all sides must meet all obligations under international humanitarian law, both towards civilians ahead of impending attacks, as well as maintaining proportionality in any kind of military response.”

Mr. Ban also reiterated his condemnation of the firing of rockets and the building of tunnels into Israel from Gaza.

“Once again, the Secretary-General underlines the critical importance of ending hostilities.”

The Israeli military offensive in Gaza, which is home to 1.8 million people, has left hundreds dead and thousands injured. Over 182,000 displaced people have now taken refuge in facilities run by the UN Relief and Works Agency for Palestine Refugees in the Near East (UNRWA).

In a related development, UNRWA said that a cache of rockets was found today at one of its schools in central Gaza. The discovery came during a regular UNRWA inspection of the school, which was closed for the summer and not being used as a shelter. All the relevant parties have been notified.

“We condemn the group or groups who endangered civilians by placing these munitions in our school,” said UNRWA spokesperson Chris Gunness. “This is yet another flagrant violation of the neutrality of our premises. We call on all the warring parties to respect the inviolability of UN property.” 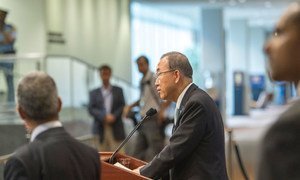 Urging Israelis and Palestinians to stop the fighting now, “in the name of humanity”, United Nations Secretary-General has again joined the Security Council in calling on the parties to agree on an “immediate and unconditional” ceasefire, allowing for the delivery of urgently needed humanitarian assistance to the Gaza Strip.