28 July 2014
With preparations underway for the United Nations to take over from an African Union-led peacekeeping mission in the Central African Republic (CAR), the Security Council today requested Secretary-General Ban Ki-moon to review what was done and how it could be done better in future transitions.

The request was made during the Council’s open debate on regional partnership and its evolution in UN peacekeeping, which focused on the Organization’s relevant cooperation with African regional groups, as well as with entities under the auspices of the European Union (EU).

The Council expressed its determination “to take effective steps to further enhance the relationship between the United Nations and regional and subregional organizations, in particular the African Union,” according to a resolution adopted by the body’s 15 members.

The meeting, the second held this year on this topic, comes about one year after the African Union-led International Support Mission in Mali (AFISMA) was transitioned to the UN Multidimensional Integrated Stabilization Mission in Mali (MINUSMA).

In the resolution, the Council highlighted the need to develop regional and subregional organizations’ abilities to deploy peacekeeping forces rapidly to support UN ‘blue helmets’. In this context, Council members asked the UN chief to initiate, in cooperation with the AU, a lessons learned exercise and to produce specific recommendations by 31 December.

The Council also called for the development of a list of needed capacities and recommendations that would help the AU develop its military, police, technical, logistical and administrative capacities.

Addressing the Council, Mr. Ban said the UN is “in a race against time for the re-hatting” of the African-led International Support Mission in the Central African Republic, known as MISCA, to create the UN Multidimensional Integrated Stabilization Mission, known as MINUSCA.

The new UN Mission will initially comprise up to 10,000 military personnel, including 240 military observers and 200 staff officers, as well as 1,800 police personnel. The CAR has been embroiled in fighting currently fuelled by inter-communal retaliatory attacks between anti-balaka and Séléka rebels, after the latter were ousted from power in January 2014. An estimated 2.2 million people are in need of humanitarian aid as a result.

Given the great need and the slower than expected support for the Mission, Mr. Ban underscored that “we – the UN, the AU and the EU, together with other key partners – need to do better.”

He stressed that the international community must use existing mechanisms and capacity more effectively and predictably, and to stop looking at different tools in isolation and only through the lens of the relevant organizations.

“Instead, we should see how we can bring them together in a way that will finally allow the international community to respond much more quickly,” Mr. Ban added.

He also noted that by mid-2015, the UN peacekeeping footprint in West Africa will be lighter with the downsizing of Missions in Cote d’Ivoire and Liberia.

Noting that despite the reconfiguration of the Missions, the root causes of the conflicts in the subregion have not yet been fully addressed, and strongly supported the continued cooperation of the AU, the Economic Community of West African States (ECOWAS) and the Mano River Union to reinforce security.

In his remarks, Mr. Ban also expressed concern about the situation in South Sudan which he called “the most rapidly deteriorating humanitarian crisis in the world today, worse even than Central African Republic and Syria,” echoing a phrase from John Ging, Operations Director for the UN Office for the Coordination of Humanitarian Affairs (OCHA).

Mr. Ban urged President Salva Kiir and Vice President Riek Machar to abide by the Cessation of Hostilities Agreement signed on January 23. Political infighting between the two turned into a full-fledged conflict that has since then uprooted some 1.5 million people and placed more than 7 million at risk of hunger and disease. Some 100,000 civilians have been seeking shelter in UNMISS bases around the country. 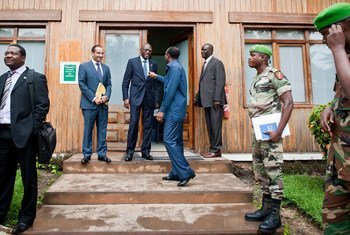 16 July 2014
The insecurity in the Central African Republic (CAR) remains a great concern, the top United Nations peacekeeping official said today, highlighting the need for airlift capacity and other logistical assistance to increase the number of UN ‘blue helmets’ in the country.