The United Nations and its diplomatic partners today called for a seven-day humanitarian ceasefire, as they continue their efforts to bring about an end to the bloodshed and destruction that is tearing apart the lives of so many civilians in Gaza and Israel.

“The people of Gaza have bled enough. They are trapped and besieged in a tiny, densely populated sliver of land, every bit of which is a civilian area,” Secretary-General Ban Ki-moon said at a press conference in Cairo. “The Israeli people have been living under the constant fear of Hamas rocket attacks. Tensions are spreading further.

“Surely now, the parties must realise that it is time for them to act,” he added, speaking alongside United States Secretary of State John Kerry, Egyptian Foreign Minister Sameh Hassan Shokry Selim and League of Arab States Secretary-General Nabil Elaraby.

Mr. Ban stressed that solutions must be based on three important pillars, beginning with an immediate end to the fighting.

“We call for a seven-day humanitarian ceasefire, extending over the Eid period, beginning with an extendable 12-hour pause,” he said, referring to the holiday that begins in a couple of days to mark the end of the Muslim fasting month of Ramadan.

“Second, start talking. There is no military solution to addressing the grievances and all parties must find a way to dialogue,” he continued.

“Third, tackle the root causes of the crisis,” said Mr. Ban, emphasizing that current peace efforts cannot be the same as they were during the previous two Gaza conflicts, in 2009 and 2012. 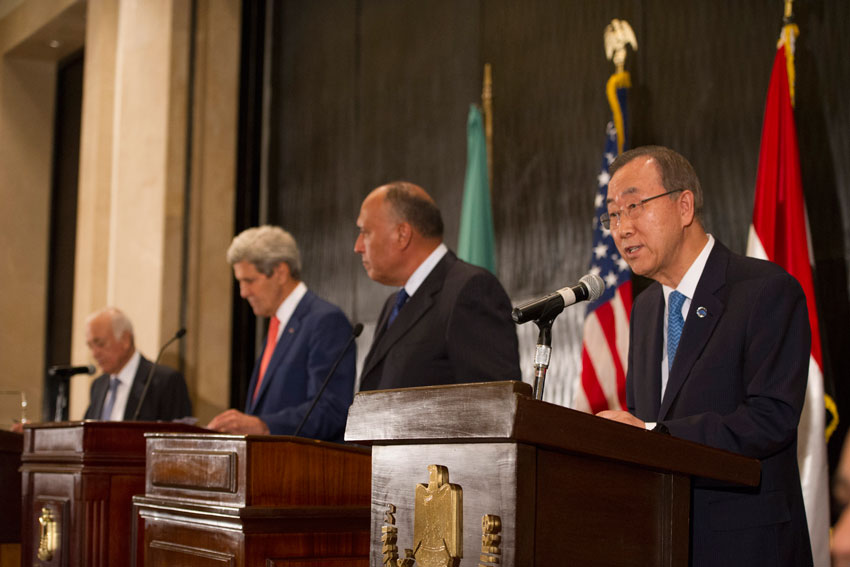 “The ongoing fighting emphasizes the need to finally end the 47-year-old occupation and the chokehold on Gaza, ensure security based on mutual recognition, and achieve a viable two-State solution by which Israelis and Palestinians can live in peace and security, side by side.”

The Secretary-General added that progress is being made, but there is much more work to do.

Today is the UN chief’s sixth day in the region, where he has been meeting with leaders in eight countries in an effort to bring about a peaceful end to the conflict, which has left hundreds of people dead and wounded, the majority of them Palestinians.

“Our joint effort is a clear signal of a global commitment to end the bloodshed and destruction that is tearing apart the lives and the hopes of so many innocent civilians,” said Mr. Ban.

The United Nations Secretary-General Ban Ki-moon met in Jerusalem today with Israeli and United States officials today in Jerusalem and called for an immediate ceasefire as the crisis in the Gaza Strip enters its 16th day.