‘Appalled’ by attack on UN-run school in Gaza, Ban urges halt to all fighting

UNICEF/El Baba
Palestinian children weep at the funeral for their loved ones in Rafah, southern Gaza Strip (15 July 2014).
24 July 2014

Secretary-General Ban Ki-moon said today he is “appalled” by the news of an attack on a United Nations-run school in Gaza where hundreds of people had taken refuge from the ongoing hostilities, adding that the incident underscores the need to stop all fighting immediately.

“Many have been killed – including women and children, as well as UN staff,” Mr. Ban said in statement issued in Erbil, Iraq, where he is currently on an official visit. “Circumstances are still unclear. I strongly condemn this act.”

Media reports say at least 15 people died in the attack on the school in Beit Hanoun, which was run by the UN Relief and Works Agency for Palestine Refugees in the Near East (UNRWA). More than 100,000 Gazans – 5 per cent of the total population – have sought refuge in UNRWA facilities since the conflict began over two weeks ago.

Mr. Ban expressed his profound condolences to the families of the victims and those of the many hundreds of innocent Gazans who have tragically been killed as a result of what he described as “the massive Israeli assault.”

The UN chief, who has been in the region this week to express solidarity with Israelis and Palestinians and to help them end the current cycle of violence, again stressed to all sides that they must abide by their international obligations to respect the sanctity of civilian life and the inviolability of UN premises, and to honour their obligations to humanitarian workers.

“Today’s attack underscores the imperative for the killing to stop – and to stop now,” Mr. Ban declared.

Following his visit to Iraq, the Secretary-General travelled to Cairo, where he met with United States Secretary of State John Kerry and stressed the need to bring this “unacceptable, intolerable” crisis to an end as soon as possible.

“I am telling to the parties – both the Israelis and Hamas and Palestinians – that it is morally wrong to kill your own people… Now it is time to sit down together, instead of killing each other,” he said at the press encounter with Mr. Kerry in the Egyptian capital.

According to the UN Office for the Coordination of Humanitarian Affairs (OCHA), civilians in Gaza have no safe place to go with 44 per cent of the land declared a ‘no-go zone’ by the Israeli army. The UNRWA facilities are not immune to destruction. At least 18 medical facilities, include five UNRWA health clinics have been hit by airstrikes and shelling.

Also today, the Special Advisers of the Secretary-General on the Prevention of Genocide, Adama Dieng, and on the Responsibility to Protect, Jennifer Welsh, expressed their serious concern at the escalation of violence in Gaza and at the targeting of civilians in the current crisis.

“We express shock at the high number of civilians killed and injured in the ongoing Israeli operations in Gaza and at the rocket attacks launched by Hamas and other Palestinian armed groups in Israeli civilian areas,” they said in a news release. 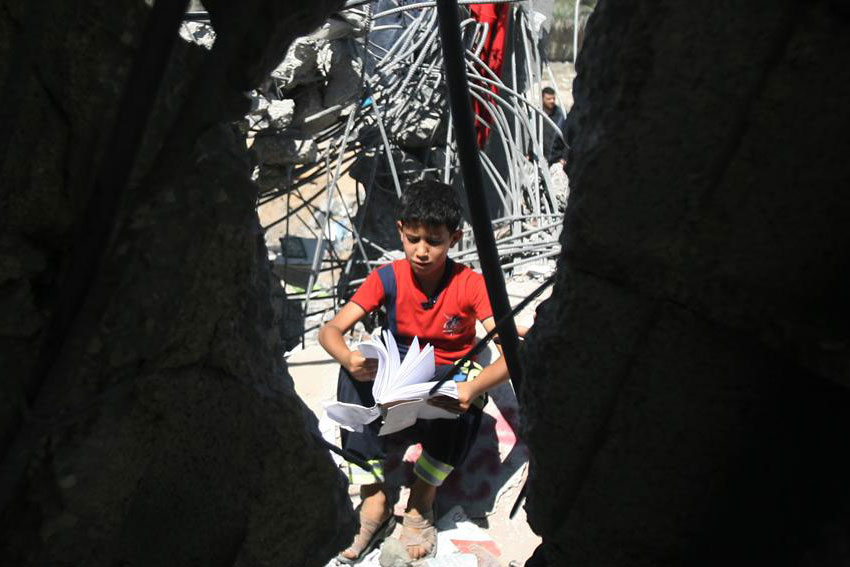 Mr. Dieng and Ms. Welsh stated that the high number of civilian casualties, particularly among the Palestinians, could demonstrate disproportionate and indiscriminate use of force by the Israeli Defence Forces. At the same time, the launching of rocket attacks by Hamas and other Palestinian armed groups into Israeli residential areas constitutes indiscriminate use of force.

“We are equally disturbed by the flagrant use of hate speech in the social media, particularly against the Palestinian population,” they added. According to reliable reports, individuals have disseminated messages that could be dehumanising to the Palestinians and have called for the killing of members of this group.

They added that the actions of all parties need to be thoroughly and impartially investigated, and those found responsible for war crimes and crimes against humanity, on either side, must be held accountable for their actions.

Yesterday, the UN Human Rights Council adopted a resolution in which it decided to launch an independent inquiry into purported violations of international humanitarian and human rights laws in the occupied Palestinian territory, including East Jerusalem.

Meeting in Geneva in an emergency session, the Council also strongly condemned the “widespread, systematic and gross violations of international human rights and fundamental freedoms” arising from the Israeli military operations since 13 June, and called for an immediate ceasefire.

In a related development, the head of the UN Educational, Scientific and Cultural Organization (UNESCO) today deplored the killing of Khaled Reyadh Hamad, a cameraman who was killed in the Shijaiyah neighbourhood of Gaza City on 20 July.

“It is essential that all recognize the civilian status of journalists, who must be able to carry out their work keeping us informed of events on the ground,” Director-General Irina Bokova said in a news release. “As stipulated by international agreements, journalists must be protected including when reporting from the scene.”