Secretary-General Ban Ki-moon today underscored his full support for efforts to overcome the division’s plaguing Iraq and build a secure, prosperous and peaceful country for all, during a stop there as part of his current visit to the region.

“Iraq is facing an existential threat but it can be overcome through the formation of a thoroughly inclusive government – a government that can address the concerns of all communities, including security, political, social and economic matters,” Mr. Ban said in remarks to the press following a meeting with Prime Minister Nuri al-Maliki.

“It must be a government in which all Iraqis, regardless of background, feel represented,” he stressed.

Mr. Ban’s visit today, his sixth as United Nations Secretary-General, comes at a “difficult, challenging” time, he noted. The armed group known as the Islamic State of Iraq and the Levant (ISIL) has taken control of more than a third of the country’s territory after unleashing a wave of attacks that has taken thousands of lives and displaced more than 1.2 million people.

He strongly condemned the “systematic and despicable” persecution of minority populations by the Islamic State and associated armed groups, adding that any systematic attack that targets the civilian population because of their ethnic background or religious beliefs may well constitute a crime against humanity.

Nickolay Mladenov, the Secretary-General’s Special Representative and head of the UN Assistance Mission for Iraq (UNAMI), has said that ISIL aimed to establish a permanent foothold beyond the control of authorities through terror and violence. 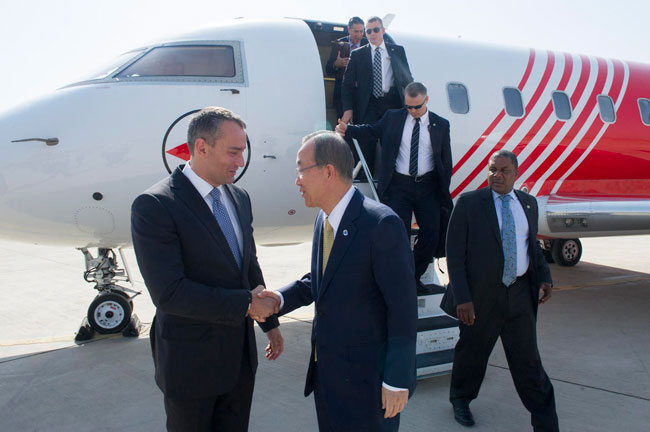 Secretary-General Ban Ki-moon is greeted by his Special Representative and Head of the UN Assistance Mission for Iraq, Nickolay Mladenov, on arrival in Baghdad. UN Photo/Eskinder Debebe 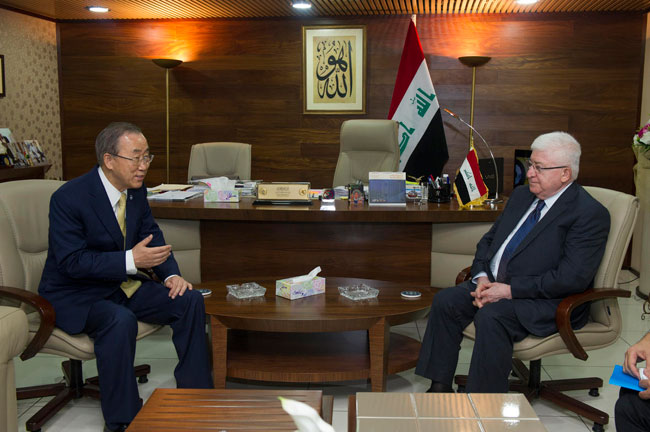 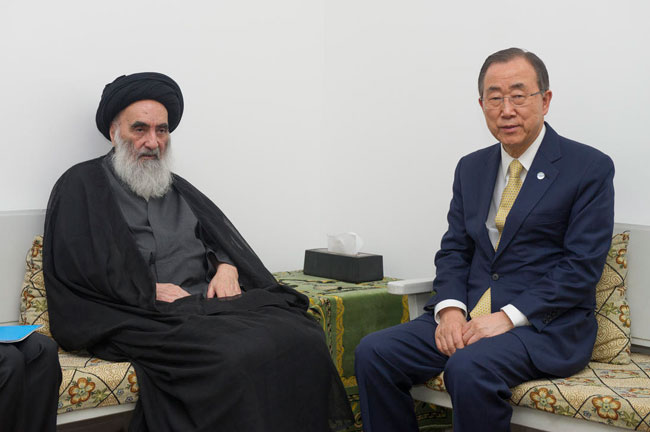 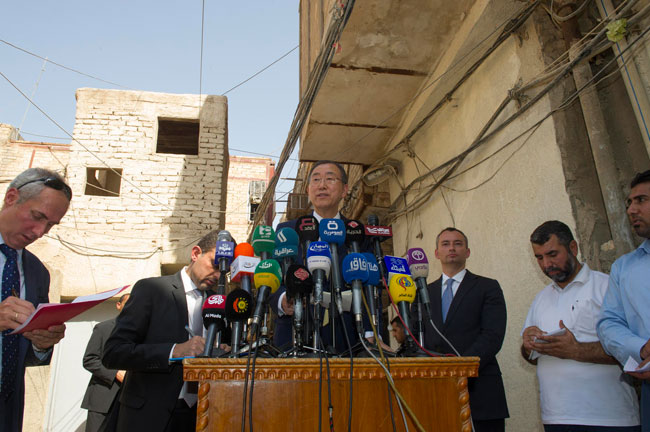 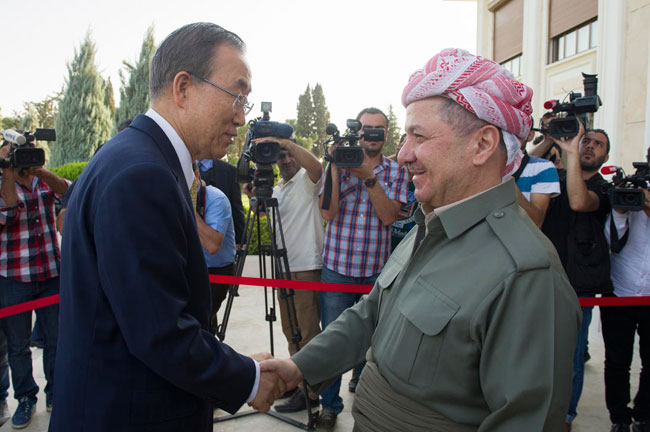 The Islamist forces seek to radicalize people and undermine the Government by exploiting legitimate grievances and manipulating divisions within society, Mr. Mladenov told the Security Council yesterday via video-teleconference from Baghdad.

Mr. Ban called on all sides to respect human rights standards and uphold international humanitarian law. “All parties to the conflict must do their utmost to ensure the protection of civilians. Humanitarian corridors should be established and honoured by all parties,” he said.

The UN and its partners are working to provide humanitarian support to those displaced by the fighting, wherever they may be, he noted, adding that the world body will use the resources provided by its generous partners to benefit all Iraqis affected by the conflict.

“In this difficult time, it is important for all leaders to fully engage in a meaningful and constructive dialogue with one another to successfully counter terrorism, strengthen democratic political processes and institutions, respect the rule of law and human rights, and promote inclusive development,” he stated.

“Iraq’s leaders bear a clear responsibility to protect the security and welfare of all Iraqi people. They must find common ground to advance the future of this great country. I count on all the leaders to show courage, wisdom, persistence and vision for the future.”

Speaking later in the day in Najaf, after meeting with Grand Ayatollah Al-Sistani, Mr. Ban said he strongly welcomed the religious leader’s “crucially important” appeal for all citizens to exercise the highest degree of restraint, to work on strengthening the bonds between each other and avoid any kind of behaviour that may affect the unity of Iraq.

Mr. Ban also congratulated Fouad Massoum on his election as the country’s new President, and said he hoped a new government will be formed without delay and within constitutionally mandated timelines.

“A new government that is truly inclusive will strengthen the unity of the country, fight effectively against terrorism and ISIS, as well as uproot the seeds of sectarianism and division,” said the Secretary-General, who met with Mr. Massoum prior to arriving in Najaf.

“I highly appreciate the special role of the host families and communities who, despite their hardships, have opened their homes,” said the Secretary-General, who encouraged continued humanitarian access to those fleeing conflict.

“Limited access to Iraqis stranded in areas of heavy fighting could have a disastrous impact on those who need our protection most,” he warned.