The United Nations Secretary-General Ban Ki-moon met in Jerusalem today with Israeli and United States officials today in Jerusalem and called for an immediate ceasefire as the crisis in the Gaza Strip enters its 16th day.

The Secretary-General met with Israeli President Shimon Peres, Israeli Foreign Minister Avigdor Liberman and United States Secretary of State John Kerry. Mr. Ban continued his mission to press Israelis and Palestinians for an immediate end to the hostilities and a return to dialogue.

Mr. Ban, who is on a regional visit, arrived in Israel from Egypt, where he met yesterday with President Abdel Fattah Al Sisi and thanked him for his leadership role in the current efforts to establish a ceasefire in Gaza. His tour also included stops in Qatar and Kuwait and will also take him to Jordan and Saudi Arabia.

Today’s meetings come as the Geneva-based Human Rights Council has convened an urgent meeting to discusses the situation, with senior UN officials reporting that that two weeks of clashes have killed over 600 Palestinians and 32 Israelis.

“First and foremost, I think the violence must stop now. We must immediately start dialogue and address all the root causes which have already been identified,” Mr. Ban said told President Peres stressing the need to once and for all establish long lasting peace.

“As Secretary-General of the United Nations, this is my third such urgent mission during the last five years. It really pains me to see such a violence still continuing periodically. That means we have to work even harder. That means we have collectively failed in bringing peace and security,” Mr. Ban said.

He said the world is in solidarity with Israelis under rocket fire, as well as with Palestinians in Gaza who are under massive assault. But there was no more time to waste. The death toll is rising by the hour. 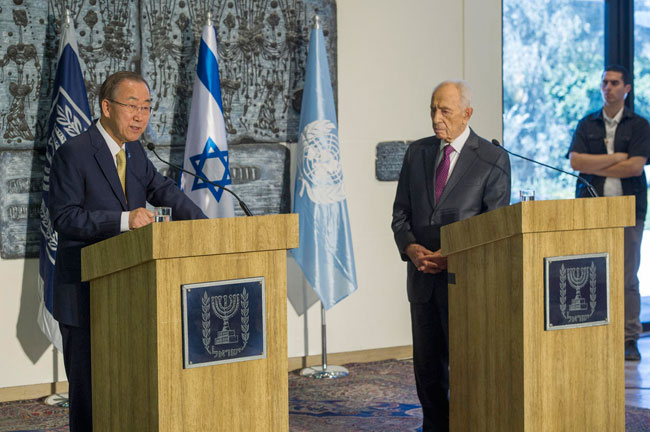 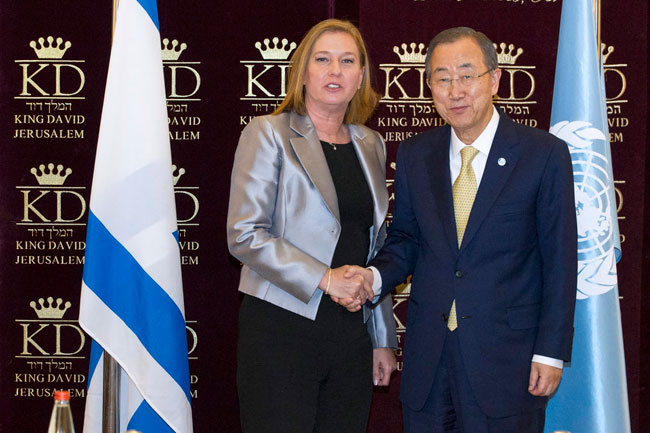 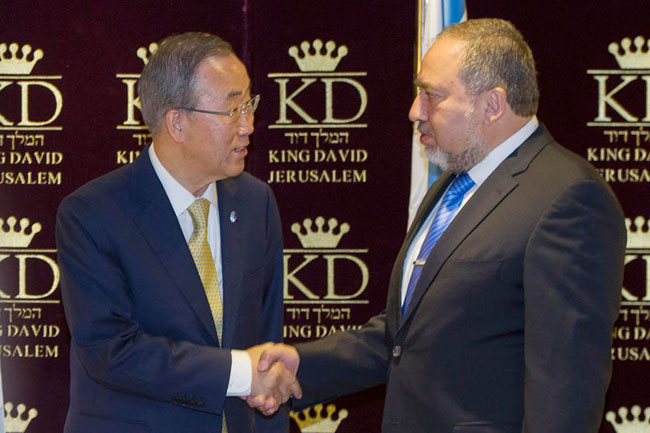 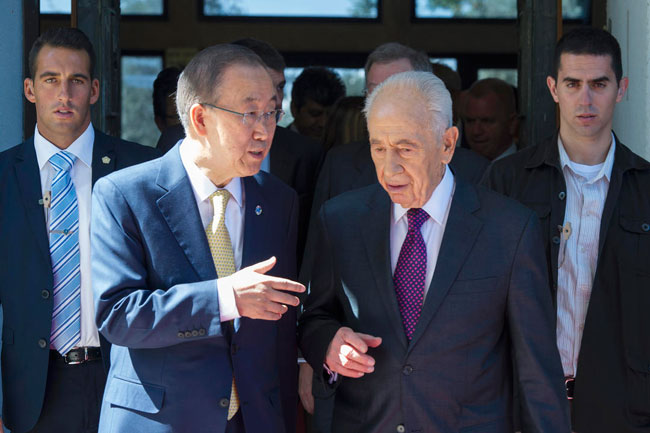 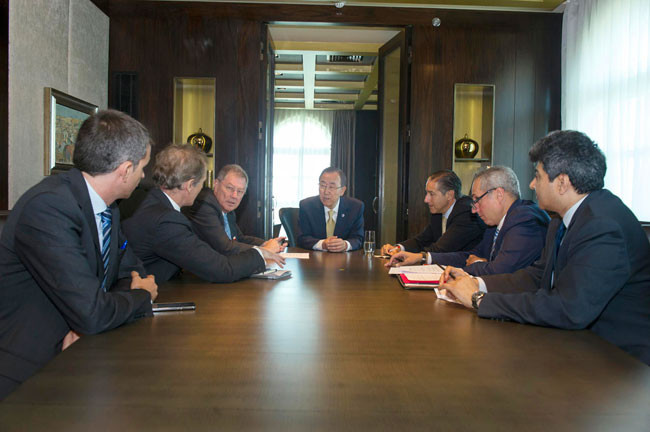 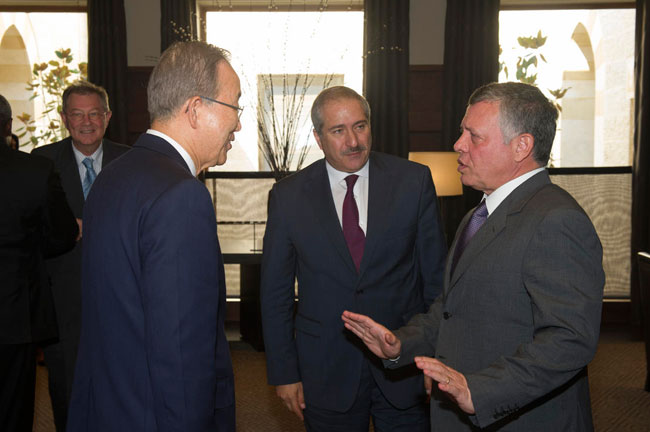 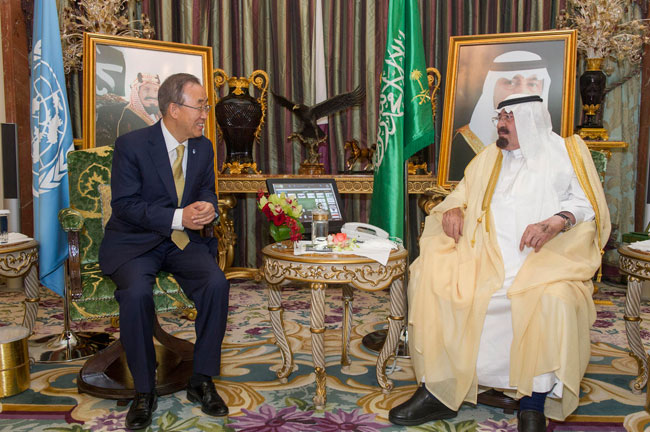 “I know there is great fear in Israel. Rockets continue to threaten Israeli civilians and disrupt normal lives of normal people. I have repeatedly condemned it, and will continue to do so. I also know there is deep pain, anguish and loss among Palestinians,” Mr. Ban said.

More than 600 Palestinian have been killed in Gaza – and almost 3,000 have been injured – the vast majority of them civilians.

“I cannot and I will not be silent in the face of this tragedy. I mourn the loss of so many innocent lives in Gaza and I grieve with the families.”

Once a cease-fire is in place, the Secretary-General underscored the urgent need to address the underlying issues including an end to the occupation and the daily humiliation and anger that comes with it. There is still hope for political process and economic prosperity – a future of two states living side by side in peace and security. Mr. Ban urged President Peres – who leaves office in August- to work closely with Palestinian President Mahmoud Abbas.

“I still believe that he is the best partner for Israelis so that both Israelis and Palestinians can live in peace and harmony,” Mr. Ban said.

The Secretary-General also met with Israel’s Foreign Minister today and stressed the need to alleviate the dire humanitarian situation in Gaza. He stressed the importance of ensuring the unhindered freedom of movement for humanitarian actors and their operations.

Speaking to reporters after meeting his meeting with United States Secretary of State John Kerry, Mr. Ban told reporters that he appreciated Mr. Kerry’s intensive and dynamic engagement and that he will meet with Mr. Kerry for a second time to continue to discuss brokering a peace deal.

“Together, we are now joining our forces and strength to make a ceasefire as soon as possible. But there are still some details which we have to make,” Mr. Ban said.

Meanwhile, a statement issued by Mr. Ban’s spokesperson said the UN chief had been alarmed earlier in the day to hear that rockets were placed in a school being run by the UN Relief and Works Agency for Palestine Refugees in the Near East (UNRWA) and that subsequently, those weapons have gone missing.

“He expresses his outrage, and regret, at the placing of weapons in a UN-administered school. By doing so, those responsible are turning schools into potential military targets, and endangering the lives of innocent children, UN employees working in such facilities, and anyone using the UN schools as shelter,” said the statement.

In light of this, the statement continued, the Secretary-General has asked for a full review of such incidents and how the UN responds in such instances. In addition, he has directed the UN Department of Safety and Security (DSS) and the UN Mine Action Service (UNMAS) to immediately develop and implement an effective security plan for the safe and secure handling of any weapons discovered in UN premises.

Later in the day, the Secretary-General travelled to Amman, Jordan, where he met with King Abdullah who he said has been a source of wisdom, inspiration and guidance for the UN and also for peace and stability in the region.

Speaking to the press after meeting with the King and Foreign Minister Nasser Judeh, the UN chief thanked the Jordanian Government and people for their strong support for humanitarian assistance for the people in Gaza, including food, medicine and sanitation.

Mr. Ban said that from Jordan he planned to head to Saudi Arabia continuing his regional visit. “My message has always been consistent and strong. This violence must stop; it must stop now. And the parties must return to dialogue, put all the pending issues on the table. I think they have identified all the problems and tackled all the root causes – why the Palestinian people have been suffering, and why the people of Israel have been living under fear or threat of rocket attack.”