IRIN/Louise Redvers
This Christian Iraqi family fled the town of Qaragosh, 30km east of Mosul, in June 2014, after militants from the Islamic State of Iraq and the Levant (ISIS) took control of Mosul and other areas of northern Iraq.
22 July 2014

The United Nations Security Council has denounced the persecution of Christians and other minority groups in northern Iraq, which used to be home to minority communities that had lived together for hundreds of years before coming under direct attack by the group known as the Islamic State of Iraq and the Levant (ISIL) and its allies.

In a press statement issued last night, the Council condemned “in the strongest terms the systematic persecution of individuals from minority populations and those who refuse its extremist ideology in Iraq by ISIL and associated armed groups.”

Hundreds of families reportedly fled Mosul this weekend, ahead of a 19 July deadline for Christians to leave the city, stay and pay a tax, convert to Islam, or face death.

The 15-member Council also expressed concern about reports that religious and ethnic minorities in the area, as well as anyone who opposes ISIL’s extremist ideology, face abductions, killings or destruction of property.

There are also reports that homes of some minority residents in Mosul have been marked, the Council noted. These are said to be residences of families who are Christian, Shia or Shabak.

The statement follows a condemnation this weekend from Secretary-General Ban Ki-moon, who called the reports “repugnant” and stressed that any systematic attack on the civilian population due to their ethnic background, religious beliefs or faith may constitute a crime against humanity and those responsible for such crimes must be held to account.

The Council added that terrorism in all its forms and manifestations constitutes one of the most serious threats to international peace and security, and that any acts of terrorism are criminal and unjustifiable, regardless of their motivation, wherever, whenever and by whomsoever committed.

“Terrorism cannot and should not be associated with any religion, nationality or civilization,” the Council stressed.

More than 1.2 million people have fled their homes since the latest fighting broke out in June. In total, more than 2.2 million people are now displaced in Iraq, including one million people already seeking refuge in the country as a result of the Syrian conflict and previous conflicts.

The Council called for an intensification of efforts to address the humanitarian needs of the people displaced by the current conflict.

The members also called on politicians to work together “in an inclusive and political process” to strengthen the country’s unity, sovereignty and independence. 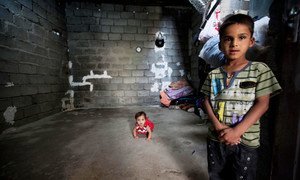 Secretary-General Ban Ki-moon today condemned in the strongest terms the systematic persecution of minorities in Mosul and other parts of northern Iraq as a reported deadline passed for individuals to convert to Islam, pay a tax, flee or face possible execution.