Secretary-General Ban Ki-moon today urged all parties to rally around collective international efforts to obtain an end to two weeks of bloodshed in Gaza and Israel and reach a ceasefire, as he continued his visit to the region with a stop in Cairo.

Mr. Ban is on the third leg of a regional visit aimed at expressing solidarity with Israelis and Palestinians and to help them end the violence. The trip, which began on Sunday, has already taken the United Nations chief to Qatar and Kuwait and will also include stops in Jerusalem, Ramallah and Amman as part of efforts to encourage a durable ceasefire.

“This is a time of profound challenge in the region,” said the Secretary-General. “Yet again, too many civilians, including so many children, are paying the price for the latest escalation. The images we see sear the soul.”

The violence has already claimed the lives of several hundred Palestinians and around 25 Israelis. The UN Relief and Works Agency for Palestine Refugees (UNRWA) announced that the number of people seeking refuge with the Agency, which has opened nearly 70 shelters, has now exceeded 100,000.

“This is a watershed moment for UNRWA, now that the number of people seeking refuge with us is more than double the figure we saw in the 2009 Gaza conflict. We are seeing a huge wave of accelerated displacement because of the Israeli ground offensive,” said UNRWA spokesperson Chris Gunness.

The Secretary-General stressed today that the violence must stop, and it must stop now. “All sides must provide the necessary space to aid the victims, assist the wounded, and extend the relief to trapped civilians. These immediate steps should open the door to a more permanent ceasefire,” he stated.

Also, it is not enough to simply return to where things stood before the latest round of bloodshed. “Going back to the status quo ante won’t solve the problem, it will only defer it for another day. It will not stop the bloodshed, it will make it even worse the next time the cycle rolls over the people of Gaza and plagues the people of Israel,” said Mr. Ban.

“Gaza is an open wound and Band-Aids won’t help,” he added. “There must be a plan after the aftermath that allows Gaza to breathe and heal.”

In addition to the Foreign Minister, Mr. Ban met in Cairo with the Secretary-General of the League of Arab States, as well as with United States Secretary of State John Kerry. Tomorrow morning, before leaving Egypt, the Secretary-General is expected to meet with Egyptian President Abdel Fattah Al Sisi. 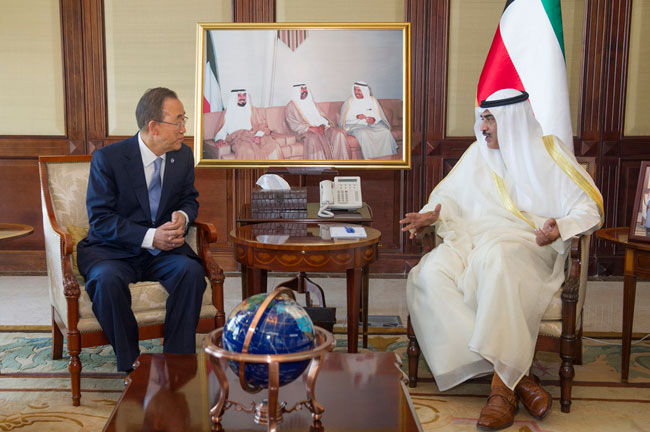 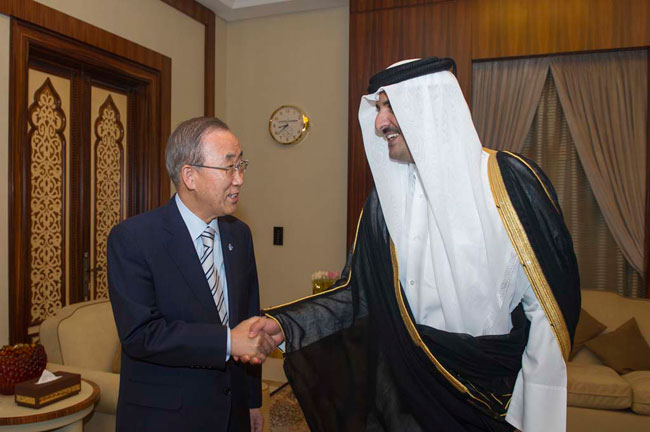 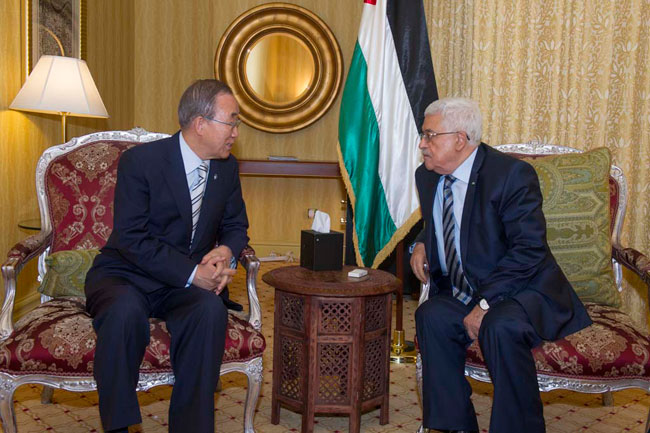 On the first leg of his Middle East visit to express solidarity with Israelis and Palestinians and help bring about a ceasefire, Secretary-General Ban meets in Doha with Palestinian President Mahmoud Abbas. UN Photo/E. Debebe

Speaking before his meeting with Mr. Kerry, the Secretary-General said he hoped their joint efforts will make a great contribution to ongoing mediation efforts by the parties in the region to end the violence.

“Our joint efforts are rooted in three mutually reinforcing efforts,” said Mr. Ban. These are finding a way to stop the violence; urging the parties to return to dialogue; and addressing the root causes of the crisis.

During his stop in Kuwait earlier today, Mr. Ban held discussions with the Amir, Sheikh Sabah al-Hamad Al-Jaber Al-Sabah, and thanked him for his leadership role in the Arab League. He also stressed that a ceasefire was not enough and that the root causes of the Israeli-Palestinian conflict had to be addressed.

Mr. Ban added that efforts should be made to strengthen the Palestinian government of national unity, led by President Mahmoud Abbas, by encouraging an internal Palestinian dialogue.

The Amir updated the Secretary-General on his recent meeting with Hamas leader Khaled Mashal, who had been in Kuwait the previous day.

The two also discussed the political and humanitarian situation in Iraq, with the Secretary-General thanking the Amir for Kuwait’s $10 million donation towards the UN’s humanitarian work in Iraq.

While in Kuwait, the Secretary-General also met the Foreign Minister, Sheikh Sabah Khaled Al-Hamad Al-Sabah. In addition to discussing the situation in Gaza and Iraq, they also reviewed the current crisis in Libya.

The Security Council on Sunday called for an immediate ceasefire in Gaza, as Secretary-General Ban Ki-moon met with Qatar's Emir Sheikh Tamim bin Hamad al-Thani and Palestinian President Mahmoud Abbas in Doha, the first leg of a Middle East tour which aims to end the conflict.