“For the past five years, we have come together to celebrate the life and spirit of a unique individual who touched the entire world – Nelson Mandela – the Madiba,” General Assembly President John Ashe said during a special event at UN Headquarters.

In 2009, the Assembly declared 18 July “Nelson Mandela International Day” in recognition of the former South African President’s contribution to the culture of peace and freedom. Today’s is the first observance since Mr. Mandela’s passing last December.

“This year, for the first time, we celebrate his birthday without him. But while our hearts hang heavy with loss, we have his indelible memory and his important legacy to carry forward,” said Mr. Ashe.

Every year on Mandela Day, people around the world are encouraged to devote 67 minutes to helping others – by volunteering in a hospital, tutoring a child, providing food for the homeless, or any other community service.

“We may not be able to change the sorrows or the tragedies of the world singlehandedly, but indeed, it is in our hands to make a difference with our individual 67 minutes,” Mr. Ashe said.

The campaign – “Take Action, Inspire Change” – is based on people devoting one minute of their time for every year that Nelson Mandela devoted to public service – as a human rights lawyer, a prisoner of conscience, an international peacemaker and president of South Africa.

“We cannot give in to despair and despondency, because each inspired action of service, kindness or generosity will bring us closer to the realization that if we give our all we can strive for a better tomorrow,” said the Assembly President.

Hence, it is critical to involve “each and every one of us” in the process to craft a global development agenda, he added. A future plan must create a vision of justice, prosperity and opportunity for all the peoples of the world, while honouring the planet.

“In this first year without Madiba, each and every one of us gathered here knows that he will be remembered and revered for many generations to come. His impact on the world was so profound and meaningful, that his name will be spoken by our children and our children’s children.”

Also speaking at the event, Secretary-General Ban Ki-moon said that “Nelson Mandela sacrificed his freedom for human rights. He was also a champion of sustainable development.”

Mr. Ban remembered Mr. Mandela’s personal connection to the earth as a gardener. Even in jail, he gained the right to plant a garden on the roof of the prison.

The Secretary-General quoted Mr. Mandela: “To plant a seed, watch it grow, to tend it and then harvest it, offered a simple but enduring satisfaction. The sense of being the custodian of this small patch of earth offered a small taste of freedom.”

In tribute to that, Mr. Ban will join volunteers from MillionTreesNYC and UN staff to tend to dozens of newly planted trees near UN Headquarters and in the community of East Harlem.

He said that New York City’s trees remove an impressive 2,200 tons of pollutants from the air each year. The city is also aiming to increase its urban forest by 20 per cent. These valuable initiatives show that everyone can be part of the climate solution.

On a global sale, Mr. Ban said creative ideas were advancing progress and called for a major global push for action. In September, he will convene a climate summit at the UN with Heads of State and Government, along with leaders from business and finance, local government and civil society. Honouring Mr. Mandela’s legacy included addressing climate change, promoting sustainable development and helping all people to enjoy lives of dignity, he noted.

Mr. Mandela wrote a letter to the UN in 2010, when the General Assembly declared this Day, asking the Organization to honour him by honouring millions of people who contributed to the struggle for freedom everywhere.

“The best way to commemorate these struggles is for people everywhere to work with and within communities to make this a better world,” Mr. Mandela wrote.

UN Women Executive Director Phumzile Mlambo-Ngcuka, in her message, said the Day is an opportunity for everyone to bring the best out of themselves by taking some form of action in solidarity with others, to be of service, and to inspire change in the world.

She recalled watching him stand up for women's participation, and noted that under his presidency, women’s representation in South Africa's parliament increased from 2.7 per cent to 27 per cent. In addition, when it came time to choose his cabinet, Mr. Mandela made sure that one-third were women.

"The call to action on Mandela Day is for each of us to go out and do something. For men and boys to support gender equality, for those with wealth to support those of lesser means, for collective action on climate justice. For those of us who have had an opportunity to learn, it is a call to teach and share our knowledge."

♦ Receive daily updates directly in your inbox - Subscribe here to a topic.
♦ Download the UN News app for your iOS or Android devices.
Nelson Mandela 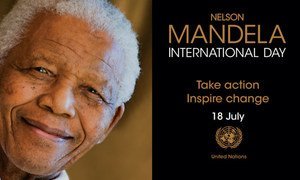 UN: Can you spare 67 minutes to take action on Nelson Mandela Day?

UN Secretary-General Ban Ki-moon will be among citizens around the world who will be volunteering 67 minutes of their time on Friday, Nelson Mandela Day, to make a small gesture in solidarity with humanity – one minute for every year of the South African leader’s public service.