Deeply concerned by the “urgent humanitarian situation” of unaccompanied child migrants from Central America, Secretary-General Ban Ki-moon today called for Governments of countries where the children start, continue or finish their journeys, to protect their dignity and human rights.

“Unaccompanied minors, including those under seven years of age, are making this dangerous journey, often relying on unscrupulous human smuggling networks that expose them to harm, exploitation and abuse,” Mr. Ban said in a message to the Conference on Unaccompanied Child Migrants, in the Honduran capital, Tegucigalpa.

The message was delivered by the United Nations Resident Coordinator, Consuelo Vidal, on behalf of Mr. Ban, who is currently wrapping-up a visit to Haiti and the Dominican Republic.

In addition to the UN and Honduras, the two-day international conference, which kicked of today, includes representatives from El Salvador, Guatemala, Mexico and the United States, as well as the Organization of American States (OAS).

According to information from the Honduran officials, there were 2,700 Honduran migrant children in the United States last September. By June of this year, there were more than 13,000. In all, an estimated 52,000 children were caught crossing the United States border since October, most of them from Central America, based on figures in media reports.

Last year, the UN held a high-level Dialogue on International Migration and Development to identify concrete measures to strengthen cooperation and enhance the benefits of international migration for migrants and countries, while reducing its negative implications.

In its unanimously adopted declaration document, the 193 Member States “reaffirmed the need to promote and protect effectively the human rights and fundamental freedoms of all migrants, regardless of their migration status, especially those of women and children.”

Citing this passage, Mr. Ban issued a plea for compassionate and comprehensive ways to ease the plight of child migrants: “I therefore call upon the Governments of the countries concerned, whether of origin, transit or destination, to urgently protect the human rights of migrant children, most importantly their life and physical integrity as laid out in relevant international legal standards.”

Raising concerns about human trafficking of minors, Mr. Ban called for the sensitizing both parents and children about the dangers of “irregular, un-planned migration” and about relying too often on inaccurate claims and information.

He also noted the importance of better understanding and addressing the root causes behind the current phenomenon.

Poverty and inequality are longstanding issues in the region, he said, but we need to also grapple with insecurity and the role of criminal groups thriving in contexts of weak institutions, poor rule of law and impunity.

“Leaders from Central America have drawn repeated attention to this security challenge and have requested international support,” Mr. Ban said in his message. “We must all recognize that we have a vested interest in providing such support.”

As the plight of unaccompanied minors from Central America arriving at the US border continues to spark debate, the UN Refugee Agency (UNHCR) recently issued its latest report,Children on the Run, which unveils the humanitarian impact of the situation by analyzing the reasons that 404 unaccompanied children gave to a team of researchers for why they left their homes. The report also makes recommendations for a way forward.

Just last week, the agency expressed concern over the rising number of children and families leaving their home countries in Central America and urged all countries in the region to adopt a robust humanitarian response that is based on fundamental protection principles. This response, UNHCR said, should include efforts to address the root causes of this movement; to prevent and respond to human trafficking; and to meet the needs of those children who may be victims of persecution or torture.

“We recognize the enormous challenges facing the US and other countries as a result of this large movement of people,” said Shelly Pitterman, UNHCR’s Regional Representative in the United States. “We’re witnessing a complex situation in which children are leaving home for a variety of reasons, including poverty, the desire to join family, and the growing influence of trafficking networks.”

And as indicated in the UNHCR study, within this movement there re also children who are fleeing situations of violence at the hands of transnational organized criminal groups and powerful local gangs.

UNHCR therefore urged a comprehensive response aimed at preventing the need for such movement and addressing the best interests of the children who have already left. Development agencies, human rights actors, and donor Governments must help the countries of Central America analyze and address the poverty, lawlessness, and other factors that force people to seek a better life or to escape harm. At the same time, children who have been trafficked or who fear persecution or torture need to be given the opportunity to tell their stories and have their best interests determined.

“Those fleeing violence and persecution,” said Ms. Pitterman, “will require access to asylum determination procedures and will need long-term protection. Others will be able to return home and should be assisted with re-integration.” 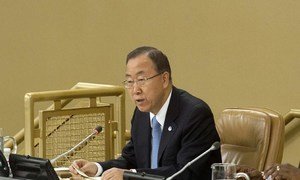 The General Assembly High-level Dialogue on Migration and Development opened today in New York with a call from United Nations Secretary-General Ban Ki-moon to implement measures that protect the rights of millions of migrants as well as recognize their contributions to society.