Aubrey Graham/IRIN
Women sit together outside a dormitory at the Heal Africa Transit Center for victims of sexual violence.
14 July 2014

The appointment of a presidential adviser on conflict-related sexual violence and child recruitment in the Democratic Republic of the Congo (DRC) marks “a new dawn” in tackling these scourges, senior United Nations officials said today.

The appointment of Jeannine Mabunda Lioko Mudiayi is a demonstration of President Joseph Kabila’s personal commitment to the fight against conflict-related sexual violence and recruitment and use of children in the DRC,” said Zainab Hawa Bangura and Leila Zerrougui, the Secretary-General’s Special Representatives on Sexual Violence in Conflict and Children and Armed Conflict, respectively.

“It comes at a crucial moment when the Government of DRC is moving forward and asserting greater ownership in the fight to end conflict-related sexual violence and the recruitment and use of children in its armed forces,” they added in a joint statement.

The envoys pledged their full support and collaboration with the new appointee and called on civil society, service providers, non-governmental organizations and UN partners to rally behind her to ensure that her work is successful.

Last month, Ms. Bangura noted that the DRC – described by her predecessor as “the rape capital of the world” – has shown commitment at the highest level to end sexual violence, including by signing a joint communiqué with the UN. It is also developing new legal structures to end impunity for perpetrators.

Meanwhile, the latest report of the Secretary-General on children and armed conflict noted that the UN has documented 910 children (783 boys and 127 girls), who had been newly recruited and used by armed groups.

Almost half of the children were reportedly used as combatants, but children were also used as porters, cooks, informants and in other support roles. Most of the girls were subjected to sexual slavery. 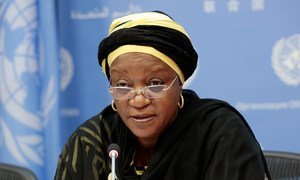 The United Nations envoy on sexual violence in conflict today voiced her disappointment that only two people were convicted of rape during the recent trial of 39 soldiers and officers charged with committing crimes in and around the town of Minova in eastern Democratic Republic of the Congo (DRC) two years ago.