UN Photo/Shareef Sarhan
Two children stand in front of a house that police said was destroyed in an Israeli air strike in Maghazi refugee camp in Center Gaza Strip.
11 July 2014

Voicing alarm at the Israeli military operations resulting in the killing of Palestinian children and other civilians in Gaza, as well as the indiscriminate firing of rockets from Gaza into Israel, senior United Nations officials today appealed to all sides to abide by their obligations to protect civilians.

“Israel, Hamas, and Palestinian armed groups in Gaza have been down this road before, and it has led only to death, destruction, distrust and a painful prolongation of the conflict,” High Commissioner for Human Rights Navi Pillay said in a news release.

According to the High Commissioner’s office (OHCHR), 88 Palestinians, including at least 21 children and 11 women, have been killed in Gaza, as of late Thursday, as a result of Israeli strikes since the beginning of “Operation Protective Edge” on Tuesday night.

Reports suggest that hundreds more have been injured. Israeli media reports over 800 strikes since the operation began, with 60 on the morning of 10 July alone, says OHCHR.

UN officials, including Secretary-General Ban Ki-moon, have warned of the risk of an all-out escalation in Israel and Gaza, and appealed for maximum restraint by all sides. “It is now more urgent than ever to try to find common ground for a return to calm and a cease-fire understanding,” he told a meeting of the Security Council yesterday.

Ms. Pillay warned in particular that attacks must not be directed against civilians or civilian objects, nor should military assets be located in densely populated areas or attacks be launched from such areas.

“For its part, the Government of Israel must take all possible measures to ensure full respect for the principles of distinction, proportionality and precautions in attack, during the conduct of hostilities, as required by international humanitarian law. In all circumstances, they must avoid targeting civilians,” she said.

“However, we have received deeply disturbing reports that many of the civilian casualties, including of children, occurred as a result of strikes on homes. Such reports raise serious doubt about whether the Israeli strikes have been in accordance with international humanitarian law and international human rights law.”

In a separate statement, Special Representative of the Secretary-General for Children and Armed Conflict, Leila Zerrougui, condemned in the strongest terms the killing of at least 21 children and the injuring of many more during the ongoing military offensive.

“We are facing a crisis for the protection of children,” said Leila Zerrougui. “I urge all parties to show maximum restraint to prevent additional child casualties.”

The latest flare-up of Israeli-Palestinian violence comes in the wake of the kidnapping and murder of three Israeli teenagers in the West Bank in late June and the subsequent kidnapping and killing of a Palestinian teenager from East Jerusalem last week.

Given the number of children killed in the offensive, combined with these kidnappings and killings, there are “indications of a worrisome trend where children have become not only victims, but the face of the conflict,” Ms. Zerrougui said.

OHCHR noted that the targeting of civilian homes is a violation of international humanitarian law unless the homes are being used for military purposes. In case of doubt, buildings ordinarily used for civilian purposes, such as homes, are presumed not to be legitimate military targets.

Even where a home is identified as being used for military purposes, any attack “must be proportionate, offer a definite military advantage in the prevailing circumstances at the time, and precautions must be taken,” it added.

Ms. Pillay voiced deep concern about the prospect of a ground offensive and strongly echoed the Secretary-General’s call for a ceasefire.

“It is high time that leaders on all sides abandon their poisonous rhetoric and deadly tit-for-tat behaviour in favour of a peaceful resolution to this impasse.” 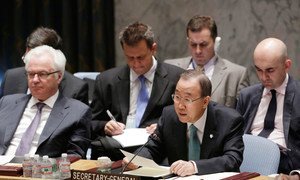